By admin on February 9, 2012Comments Off on “The Little Pot That Could” on Display 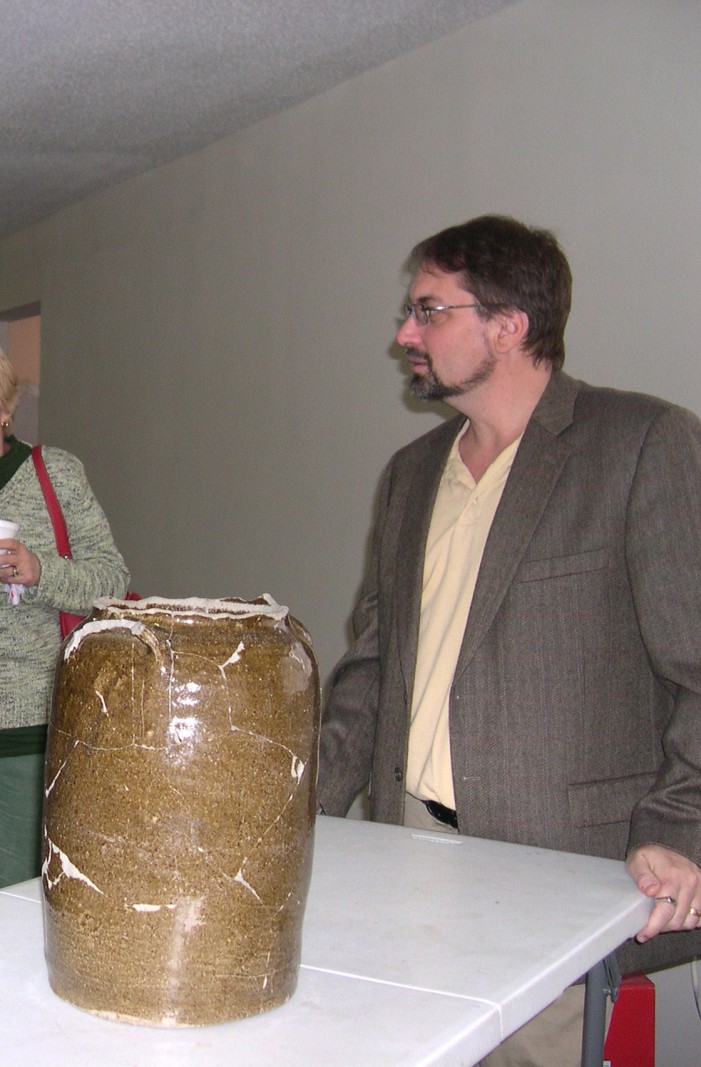 “If you don’t know where you came from, then you won’t know where you are going,” were the challenging words from Councilman Willie Bright as he closed the first in the four-part series on African-American History, which he is presenting each Saturday morning at Macedonia Community Center. Rev. ___ Holloway (Shaws Creek Church) closed the meeting with prayer, after first speaking and saying, “We are a people who are accustomed to praying.” Both gentlemen were evincing their connection with history.

A large group attended the first in the series: Dave the Slave Potter was the subject, and two presenters of note took the podium – Leonard Todd, author of Carolina Clay and George Wingard of the SRS Archeological Research Program.  Together they brought Dave into the community center with a real pot found on location at SRS and a lecture from Todd that has been heard in the US and abroad.  Dave the Potter is known over the world.

The lecture included some interesting points made by both presenters. Wingard told of early work at SRS with the removal of 130 cemeteries, 6000 bodies, and 12,000 years of history.  This was through an effort to preserve the history as they excavated for building, and still do as new building is done. He brought with him “the little pot that could,” one of the smaller style pots made and signed by Dave, and that was found in a trash pile, in pieces.

The most poignant of remarks came with the information that the pot was signed on April 16, 1862, the date that Lincoln was signing a proclamation to free the slaves in the DC area.  Wingard pointed out that Dave could not have known through the usual means of news gathering that this was happening at the same time. Was there some more intuitive or “spiritual route” of knowing? Wayne O’Bryant pointed out from the audience this part of the African-American cultural history that offered another way of “knowing.” O’Bryant also stated that he felt, through Dave’s productions, including cursive writing which was not so easy for an unlearned person, that he was indeed “a genius.”

Other points of interest that came from the lectures was that there are no pictures of Dave. Todd answered a question from the audience that Dave, who had one leg, was assisted in his work on the clay wheel by a man, Henry, who had disabled arms (Henry did the “leg work” for Dave), and that this scene was made into a small sculpture by an artist in New York, who died before he could create it into a larger piece.

Dave was born in 1801, according to Todd, learned through his great research; he was “country born” (here in the South) and was owned by Harvey Drake, a son-in-law of Dr. Abner Landrum. He could “make the book talk” – a way of saying someone could read – because his owners chose to give him lessons. This decision had its import in the need for him to be able to read the Bible as a way toward Salvation, according to Todd. As Todd noted, he used such a word as concatination (meaning: linking together) which spoke of knowledge beyond the ordinary. He not only could read but he was around to hear Dr. Landrum and other very educated people who spoke well of many things. The Editor of the Advertiser, in 1973, spoke of Dave in this way: he has an “intelligent twinkle in his eye.”

There was a period in which Dave did not write on his pots. Leonard Todd believes this was because of uprisings in which slaves were beaten because they were trying to read. He was probably cautioned by his owners to refrain, said Todd.

Author Todd says that Dave is “one of the most important figures in the history of South Carolina.”

In closing he noted the newest discovery of a pot that held a poem which read: “O the heavens and stars/ Hard work to make big jars.”

Todd and Wingard offered the facts that there are 125 known signed pots and 30 with poems, out of the thousands that he must have made.

“The Little Pot That Could” on Display added by admin on February 9, 2012
View all posts by admin →