Hospitality Abounds at the Senior Center

By admin on March 30, 2012Comments Off on Hospitality Abounds at the Senior Center 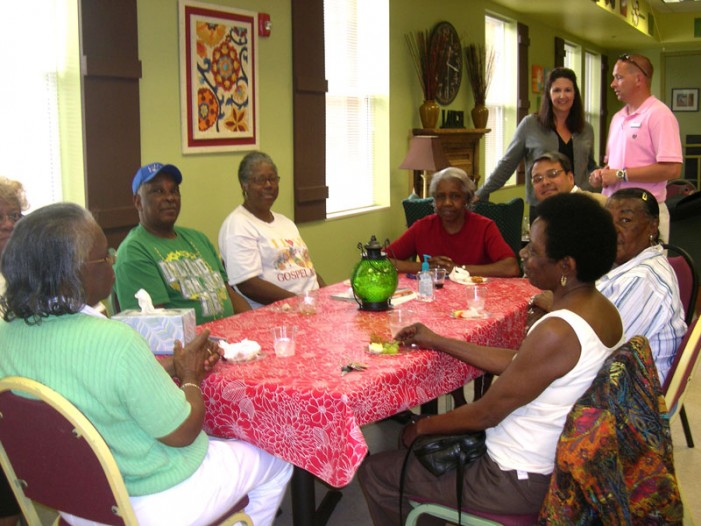 Multigenerational Activities Under one Roof –

Thursday afternoon the Edgefield County Senior Center on Center Springs Rd. was bustling with activity.  For those who have not returned to this building since its opening in June of 2008, each should find a way to visit it to see what has been done to change it from an institutional look to that of a social center with cozy corners as well as inviting open spaces for activities.

This particular day, a group that is working to be licensed for this county, Tri-County Home Health, was having a “meet and greet” social time to give folks in Edgefield an opportunity to learn about their services. They had a lovely table of food and many attractive staffers greeting people as they dropped by.  They also gave free blood pressure checks, giving folks a chance for people to get to know them.

Not too far away were two large round tables with seniors who were having a snack before ending their day.

And across the lobby, which now holds sofas, wicker chairs and comfortable pillows to “soften” the visiting, was a different kind of group – generations apart from the other area.  The Kids Corner holds its after-school program in one of the large areas of the building. It was bustling as games and activities, and maybe a little study, were in full swing, with an outdoor area for those who wanted to enjoy the spring weather.

All this activity under one roof!  It was invigorating and entertaining.

In talking with the seniors, they spoke of an invitation being given to all persons “of age” to try the place out. Mrs. Mary Mosley said that they have fun at the Center.  Many of the women say they arrive about 8:00 and enjoy a breakfast before they begin a day of exercising with machines or walking on the track.  (Jean Hammond says she does not get there until after 8:30 and coming in from the Westside also gives her an opportunity to run errands in town.) Then they exercise together, led by a staffer. Lunchtime offers a good meal of meat, at least two vegetables with chocolate cake on that day for dessert. (There was a discussion as to whether it was German chocolate or not in that it had coconut also.) And then they don’t go home.  They play cards or board games or whatever interests them. This was about 3:30 and they were enjoying talking among themselves.

Some days they sing, led by Alice Butler or Tommy Williams – he is the blind singer who performs with groups, and is a senior also, and he has appeared in the printed edition of this newspaper.

One senior remarked that she does just a little bit of exercising, so wearing something not-so-casual as she was that day did not inhibit her.  In the exercise room there are many machines including bicycles and a treadmill.

And, each day, before their main meal, they enjoy Bible reading and prayer – this is led by a different person each day.

Doesn’t that sound like fun?  The invitation is open.

Hospitality Abounds at the Senior Center added by admin on March 30, 2012
View all posts by admin →