By admin on April 24, 2012Comments Off on Local Hunter Harvests Four Turkeys at NWTF Event 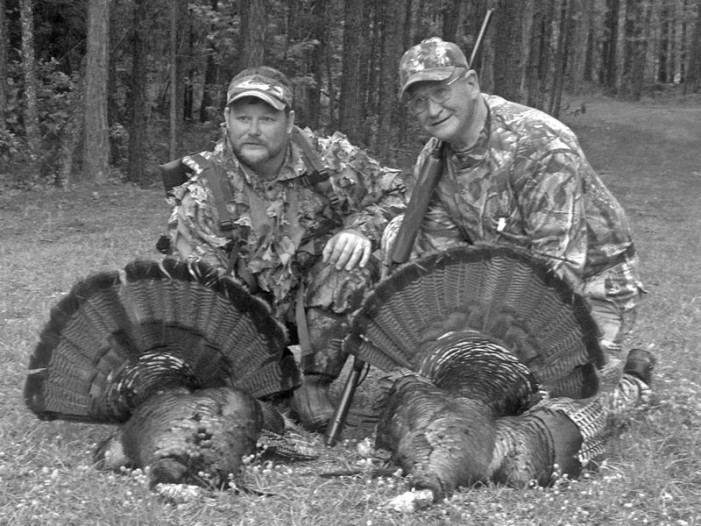 “I’m happy. I think everything went well and everybody had a great time,” said Randy Green, the NWTF’s new national coordinator of the Wheelin’ Sportsmen outreach program.

Bobby Hammond of Edgefield needed only an hour or so of daylight Friday to harvest two gobblers, including a 20-pounder, the day’s biggest bird. The 77-year-old Hammond harvested two other gobblers early Saturday morning, reaching his limit for the weekend.

“It was pretty amazing,” said Hammond, who was assisted by Tal Mims, a U.S. Forest Service wildlife biologist at SRS, and NWTF assistant vice-president for education and outreach programs Tom Hughes. “As soon as we stopped the truck, we heard turkeys gobbling on their roost.”

The hunt, which always attracts hunters from across the United States, had an international presence for the first time with 23-year-old Ontario native Brad Mewhinney participating.  Mewhinney gave the weekend a special flavor from the beginning, showing up at Thursday’s kickoff meeting wearing a Detroit Red Wings hockey team T-shirt that stood out in sea of camo wear.  “I read about the hunt on the NWTF website,” said the 23-year-old Mewhinney, whose uncle John Arnold, was president of an NWTF chapter in Ontario. “It was great. I’ll definitely be back next year.”

The hunt, put on through a partnership of the NWTF, USFS and Department of Energy, is the only turkey allowed on the SRS property each year.  “It’s been such a blessing for us to do this,” said Tracy Grazia, a USFS wildlife biologist at SRS. Mims called the event the “highlight of his year.”  Sponsors of the event included the NWTF Aiken Chapter, Wackenhut Services, Savannah River Remediation, Savannah River Nuclear Solutions and the Aiken Sertoma Club, which provided meals.

Several prizes and gear were given to hunters. Through pre-hunt meetings, daily hunts, meals and other activities, the group developed the camaraderie common to NWTF Wheelin’ Sportsmen events.  “This event really shows the spirit of what our outreach program is all about – sharing,” Hughes said.

The NWTF’s Wheelin’ Sportsmen program holds events throughout North America for people with disabilities. The NWTF has two other outreach programs – the JAKES youth program and Women in the Outdoors.