“Doodle” is Her Name, But Dawdle She Doesn’t 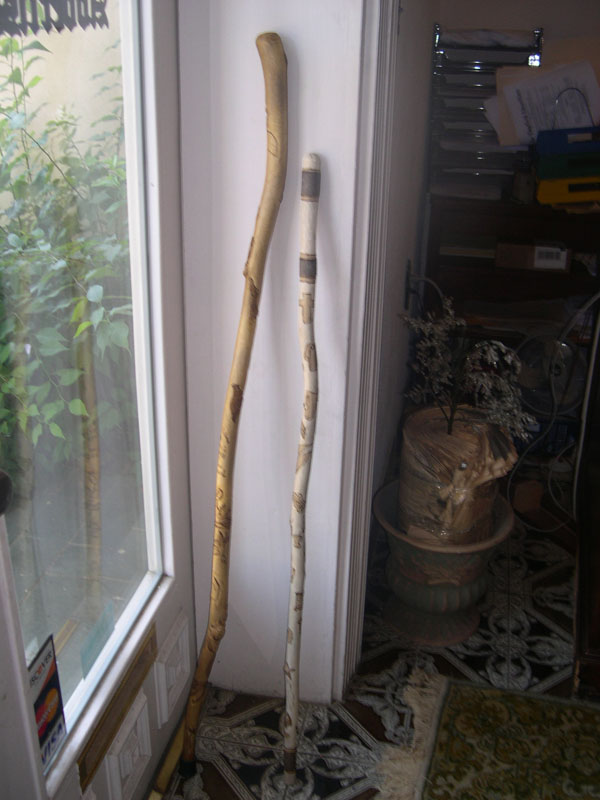 Thelma Chambers, known by all her friends as Doodle, worked during summers as program director for Camp Ton-A-Wandah.  Many in this area know Ton-A-Wandah as the place where the late Boots Bandy worked, also. Through Boots and her friend Margaret Edwards, Doodle came to know Johnston.

The person who has been telling us the story of Doodle and her good works is Anne Hughes, who has never met Doodle, but talks to her on the phone at least once a week – a long distance friendship as one might say.  Ms. Chambers lives in Tryon and Anne lives in the area, on Fruit Hill Road.

In 2003, Hughes received one of Ms. Chamber’s walking sticks (can be called a staff) as a birthday gift (see photos); it was created just for her, with carvings on the tall staff that represent animals and plants on the Hughes property. At the top is a magnificent carving of a dogwood. There are numerous creatures: a rabbit, fish, deer, fox, two turtles and a dragonfly.

The process of making these staffs or walking sticks begins with acquiring the sticks.  They are of a variety of woods and must be gathered at a certain time of year, probably having to do with the sap in the tree.  Her nieces and nephews do the gathering for her.  She then takes the raw stick and strips it of its “skin,” dries it and then it is ready for carving.  Not only does she carve, but she also burns designs in the sticks.

The style of stick she works on now is the one that represents the Life of Christ.  Starting at the bottom of the stick will be burnings or carvings representing His life, including manger scene figures, the Star of Bethlehem, and toward the top of the staff is the garment taken from Jesus and gambled for by the Centurions, as well as finally, the Cross.

Ms. Chambers has a philosophy and a faith.  So much of what she does is based in her respect for Mother Nature: “Her love of nature has inspired her to change hiking staffs into works of art by carving animals, trees and flowers, in relief,” says her signature card that goes with each staff. She has written an article called “Outdoor Good Manners” which talks about being a “steward” of nature and using “good manners” when visiting nature’s special places –“Outdoor good manners require us to know laws and rules to protect property and life.”

Speaking of her signature card, she also has a special signature on each of her works of art.  She places a small piece of turquoise into the stick

Thelma “Doodle” Chambers (born in 1921) has spent her entire life communing with God through nature, including much of her work experience as volunteer with Red Bird Mission Conference in the Heart of Appalachia. On her note paper, if one is so lucky to correspond with her, is a red bird.

She is still very active and “drives herself to the Post Office,” says Anne.  Also we know she is active because she has been taking The Edgefield Advertiser for some time.  She really loves our paper, according to Anne, especially “the little English woman and Buck Asbill.” Not only does she read the paper, but she passes it on to a sister.  Upon its return she then clips special articles for friends and sends them along. It is said that she “reads our stories with great interest.”

One story in particular stirred her.  It was the story of Spann Church and their 200th celebration when the pastor rode to the church, like a circuit rider, on a horse. She was able to bring that pageantry to her own church and to complete the day of celebration with a hymn sing, like those held at Spann Church.

As for her ministry at this stage of her life –“for the rest of her life” as Anne Hughes explains it – she has produced 50 of the Life of Christ Staffs and is getting more orders every day.  For anyone who may wish to have one, contact Anne Hughes at this number: 803-430-1314.