By admin on May 3, 2012Comments Off on Rebels Making Deep Run In 2A State Playoffs 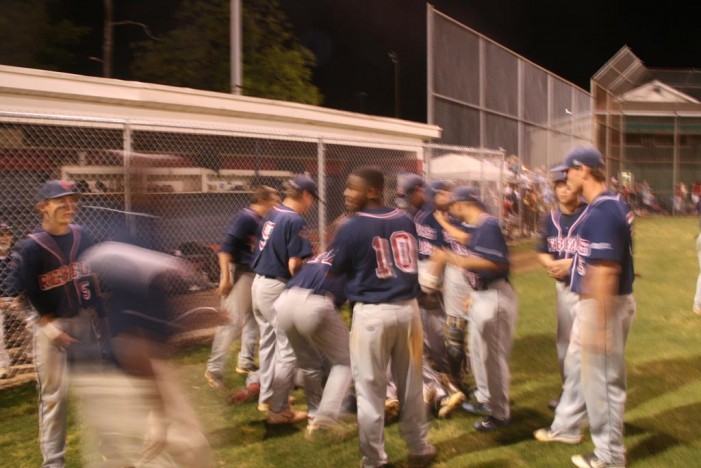 It took most of six and one half hours to decide but when the final strike was rung up on Emerald by the Rebel reliever, #7 Tannor Byrd, all was right with the world.  Strom Thurmond’s baseballers defeated Emerald at about 11:30 Wednesday night sending them into a game this Saturday at home against an upper state team to be determined.

The intensity of the play, in what turned out to be a doubleheader, was pegged out.  Emerald High, which entered post season play ranked 10th in the state, found themselves facing elimination if they could not win two from the Rebels.  They could not.   The first game took an extra inning to decide with the men from Emerald staying alive by the narrowest of margins.  This 5 to 4 loss put the Rebels and the Green Vikings into a contest that required winning or stay at home Saturday.  The best way to understand how the game went and turned out was to see Rebel #13 Padgett Sumner covered with red clay from a daredevil slide into third base, unable to talk from yelling so much, headed for the mound to celebrate.

Thurmond will play Saturday afternoon at home against an upper state team to be announced.

Rebels Making Deep Run In 2A State Playoffs added by admin on May 3, 2012
View all posts by admin →