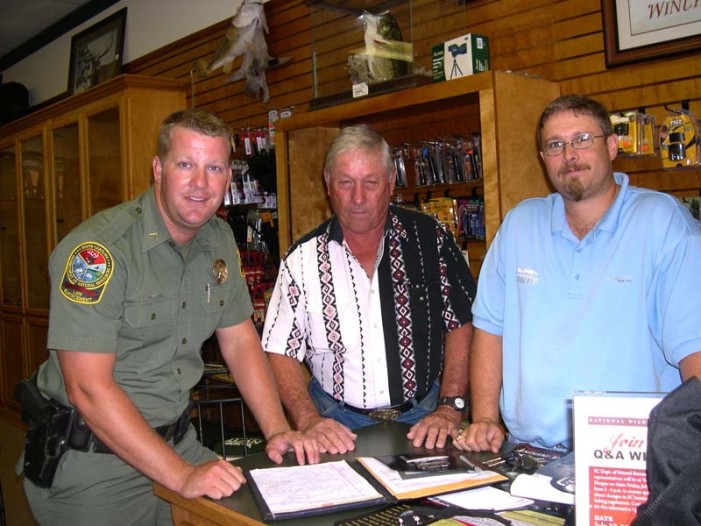 A Reaction to Overharvesting—Fewer Crappies on Your line!

A small but interested group gathered at the Turkey Shoppe in Edgefield on Friday to hear Department of Natural Resources representative Daniel Baker answer questions about the new regulations set forth by DNR.  Probably the regulation affecting more local people is the one that sets a smaller limit on crappies.  The limit has been set from 30 to 20 – and the smallest crappie must be 8 inches.  And here’s why.

Baker noted that: “Fish don’t have an address, so if you are fishing crappie on the Georgia side of Lake Thurmond (where the catch is still 30 per person) and you have put in on the S.C. side, you will be held to S.C. regulations.”

Another population that has been affected is the large mouth bass, which now has to be 12 inches to keep, once caught.

Of interest to DNR is the fresh water clam.  “That is not going to affect the Edgefield area because they generally breed where there is a sandy bottom (more so in the Lowcountry).” The Edgefield County area, in particular, is known for its red clay.  However, because some folks find freshwater clams a delicacy, they are being harvested heavily and there is now a limit on the amount that can be taken from a lake. The amount is set when the permit is given.

And speaking of food chain, losing freshwater clams affects the catfish population, which feeds on them.

There are other changes in the regulations. A phone call to Columbia and the DNR will help the sportsman clarify any confusion on the new rules. That number is 1-800-GAMETHEFT.