By admin on July 12, 2012Comments Off on Witnesses to History 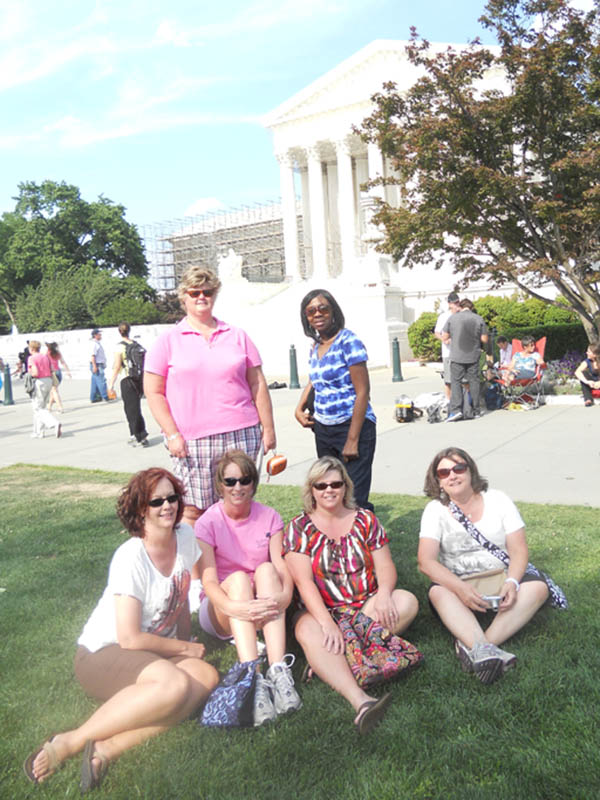 When our trip to Washington, DC, was planned 6 months ago, we had no idea of the history we were about to witness.

We knew we’d visit the Capitol, the Library of Congress, all the war memorials and many other historic landmarks. But who knew we would see the Chief Justice of the U.S. Supreme Court – up close and in person – give the historic ruling on what is known as Obamacare.

This adventure started innocently for us – a vacation trip for Kay Campbell, Angie Hood, Barbara Jay, Chelsie Lee, Tyra Miller, Linda Murphy, and Sandi Padgett, all from Johnston Elementary School – with our tour of SCOTUS (Supreme Court of the United States).  Since we were guests of Congressman Mo Brooks of Alabama, (His daughter, Chelsie, teaches with us at Johnston Elementary.)  we got a “behind –the- scenes look” at the court.

We were allowed inside to sit on the pews where the public attends sessions and rulings of the court. We even had “mike” time at the podium where lawyers present their cases to the court. (That is a very up-close and intimidating position if the justices are there.) It was during this June 27 tour that we learned that the public can attend the rulings. We knew Obamacare was to be ruled on the next day, June 28, so we began making plans to attend.

When we exited SCOTUS after the tour, the media were setting up and three people were already in line to enter court the next day. We were considering camping out that evening to secure a spot in the courtroom. During our discussion, a reporter for CBS radio asked for a quick interview. He wanted to know why we were considering camping out and attending the ruling the following day. He also wanted to know if we hoped for a certain outcome.

During this time we also chatted up a wonderful photographer from the Washington Post. He tried to discourage us from coming back to SCOTUS the next day because he said it would be a three-ring circus. We kindly explained that was precisely what we were hoping to see and be a part of!

We decided to stay at the condo and awake early to go join the line.

We arose at 5:30 a.m., readied ourselves, and walked to SCOTUS. We were there by 7 a.m. for the 10 a.m. ruling. The line had grown around the block, and we found ourselves in about the 140th position in line. We held out little hope of getting in at this point, but were determined to wait it out and at least be outside the court when the ruling was given.

While we were waiting in this line, a reporter from Bloomberg News interviewed us about why we were in line, what ruling we hoped to see, and how did we manage to be friends and work together with our political differences.

As we waited, we realized the Washington Post photographer was right – a circus had, indeed, formed. There were wall-to-wall people. We saw people holding signs on both sides of the health care debate, along with signs that had nothing to do with Obamacare. There were people with bullhorns leading chants, people playing music, and even a belly dancer!

Shortly, the line started to move! We snaked across the street. The first 50 had been taken inside to be “processed.” We now had to wait to see how many seats were available.

After another hour the line moved again. Fifty more entered the building for “processing.”

In about 15 minutes, the Capitol Police were back with instructions. “Get close. Stay close. We’re moving through these people. If you allow anyone in front of you, that’s your problem. Stay tight!” At this point strangers and friends are locking arms, holding waists or shoulders to push our way through the crowd gathered outside the court. We made it!

As we’re now waiting outside on the front steps of the Supreme Court of the United States we are busily texting, calling, and taking pictures of the crowd and ourselves. Once inside and through all the security posts, we put all our belongings in lockers and headed for the courtroom. We were escorted to a set of wooden chairs directly behind the last row of pews in the courtroom – we were in overflow seating. As it turns out, we were among the last 15-20 people admitted.

Once we were seated, we noticed all the secret service agents in the room. We could see at least 6 of them. They truly watched our every move! An agent upfront made a lunge toward someone in the audience who had made a sudden move and then the agent stopped herself as she realized their movement was non-threatening!

At ten o’clock sharp a bell sounded, and we all stood as the justices entered the court. The court was called into session and began with Justice Kennedy reading their ruling on the Alvarez and Medal of Honor case, which was the first of two rulings that would be handed down.

After about 10 minutes, Chief Justice John Roberts read the majority ruling on two major aspects of Obamacare, the individual mandate and Medicaid expansion. After reading the majority opinion, Justices Kennedy and Ginsburg read their joint dissents on parts of the law they disagreed with the majority.

After the decision had been read – we’d been in the high court for about an hour – Chief Justice Roberts thanked all for a great court session since this was the last day of the Court’s term for this year. He also recognized a court official who had served for 50 years. Court was then dismissed until October.

As we left in silence and gathered our belongings to exit the greatest court in our land, we were awed to have been witnesses to history.  Whether Obamacare will lead to the betterment of our nation or its downfall remains to be determined.

For today, we were part of history.

Witnesses to History added by admin on July 12, 2012
View all posts by admin →