By admin on August 27, 2012Comments Off on 1933 Johnston High School Football 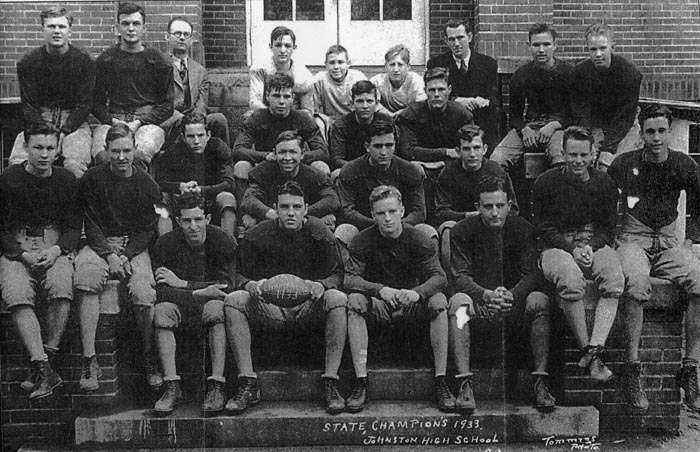 Recently, signs have been placed at entrances to Johnston that tell the story of the three state championships.  Johnston honors its teams with pride.

The photo that accompanies this story, along with this article, shows the team in 1933.  Members and coaches of that winning team posed outside the school with their signed football.  All are identified from left to right, many the ready will easily recognize and remember.  Sitting on the front step are: Ben Herlong, E. D. Stillwell, Van Edwards and Robert Stillwell.  Sitting on the lower columns fo the left and right are Roy Leapord, Doc Clark, Robert Clark and T. D. Watson.  Sitting on the second step are David Waller, Pete Bruce, Clyde Yonce and Billy Derrick.  On the third row are Albert Clark, Ernest Padgett and John Yonce.  Carl Black, Hansford Rhoden, Horace Holmes and Billy Turner are sitting on the upper columns.  Those sitting on the top step are Coach Stanton Lott, Carrol Smith, Earl Stillwell, Noland Leapord and Hugh Culp.

See more about this group of players in “Days Gone By” in an upcoming print edition of The Edgefield Advertiser.