By admin on August 24, 2012Comments Off on From the Mountains of Austria to Edgefield’s Hickory Hill 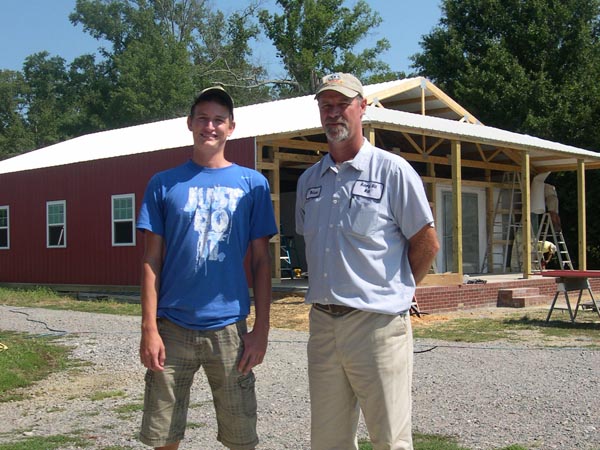 Josef Kals is Austrian, and what’s more, he comes from the mountainous western part of the country, from a small farm of 15 cows (Simmental heifers he calls them).  Here in the south of the U.S. on Faulkner Mountain Rd. he is working on a farm of 500 cows, (Holsteins) – this is Hickory Hill Dairy Farm owned and operated by the Dorns.

It is Watson Dorn who has brought his dairy into the 21st century here in Edgefield County with his machinery, his ways of handling silage, and his producing a milk product, pasteurized whole milk no doubt, to reach the market of milk drinkers who think the healthiest.  And it tastes delicious. Watson is assisted by his father Jim and mother Marie, his wife Lisa and many others who include Josef Kals and Matt Linder.

Our story is about Josef, but Matt should have a little space in this story.  He is a senior at Clemson and has been interning at Hickory Hill and plans to return to work there upon graduation. Matt is from Cowpens (great town for a dairy farmer), S.C., and he and Josef have been living in the “cabin” during their stay – a house that sits on a hill above the pasteurizing and processing unit of the dairy farm – just a short way to work.  In fact, Matt was cooking the mid-day meal for all the dairy family/hands – a job that he shares with Marie and Lisa and others.  And Josef loves the food he is getting – “lots of vegetables and beef (from their farm) and chicken,” says Marie.

Josef expresses himself well after having had very little English before arriving in the U.S. early in July. He explains that he is here on something like an internship.  He is a student of agriculture at HLFS Ursrung, an agricultural college situated in an old castle in Austria.  He says that everything here in the U. S. is “very large,” a first impression: “Everything is bigger in America.”  Then he goes on to say, “You have to feed the world,” and alludes to a movie he saw several years ago about “Feeding the world.”

How did he find Hickory Hill?  He says it was an accident, as he was surfing the Net and the name Hickory Hill came up. He called Watson Dorn and the connection evolved into his coming for 2 months – July through August. The smiles on his face are broad.  He seems very happy in his internship and very pleased with what he is learning.

When asked about the milk he is helping to produce, he says, “It tastes very good.” He notes that he can taste the silage that the cows eat, barely, and that in his country milk is produced and sold according to what the cows eat (on his farm it is grass, and it is sold as milk from grass-eating cows). At Hickory Hill corn is a big part of the silage and he got to the farm in time to help with cutting the corn they grow and helping to put it in ground storage for the fermenting period. According to Josef, back home in Austria, they bale their “grass” for silage.

Marie Dorn who was sitting in the interview to help with communication, noted that he has been introduced to Walmart and to the big grocery stores in this area – and their church life, also.  Of the church he says, “It is not that different [from home], except everything is in English!” The music in the church has not made such a great impression on him, but the guitar playing of his housemate Matt he enjoys very much. He does like our Country and Blue Grass style music.

As for his hobbies back in Austria, “skiing and mountain biking.” After all, he lives in the mountains.  Marie quickly says that he can now water ski as Watson takes him with the family to Lake Greenwood where they ski. He certainly likes the skiing, but finds the water too warm, but he is adjusting.

The interviewer wondered about the farms in Austria, compared to those here. It was noted here that folks build largely with pine and paint over it.  He says there are no painted farm buildings in Austria.  They are built of soft wood like pine, but the wood is left unpainted. Outside there was building going on at Hickory Hill, a new building probably of pine and painted green.  It is a testament to the growth of the business.

Also outside, seen through a window, is a large, healthy growth of corn, which has a maze already cut in it, to be enlarged before October.  That is when the Dorns invite folks for a fall fiesta, as one might call it, when they can attempt the maze, drink wonderful milk and enjoy the music offered for the occasion.  Last year they had a band from Sysco, the company that helps market the Hickory Hill milk. This same band will return for the upcoming event; they specialize in Blue Grass.

Josef will miss that event, but his hand will have helped make the event possible, as will Matt’s.  Matt will be returning to work at Hickory Hill; surely Josef will return at some time for a visit.

His plan is to go home to finish school and then to take up the farm life with hopes of enlarging the family farm.  He comes from a long tradition of farming.  And he is the 6th “Josef” in the family.  Sounds akin to our Southern tendencies to hold to tradition and promote our heritage.

From the Mountains of Austria to Edgefield’s Hickory Hill added by admin on August 24, 2012
View all posts by admin →