By admin on August 20, 2012Comments Off on Southern Baptist Convention Makes History Again 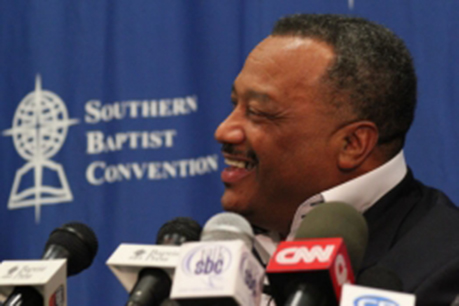 Even if you are not of the Baptist faith, chances are you have still heard the news that the Southern Baptist Convention recently made history electing their first African American president.  Rev. Fred Luter,Jr., pastor of Franklin Avenue Baptist Church in New Orleans, was unanimously elected to the post by some 7,700  “messengers” at the convention’s June 19, 2012, meeting.  While Rev. Luter is the face now leading the world’s largest Baptist organization and the largest Protestant body in the United States, on its inception in 1845, the man voted to head the newly formed Southern Baptist Convention hailed from Edgefield, SC.

Founded in 1814, the Triennial Convention was the first national Baptist organization in the US and was the body under which both Northern and Southern Baptists cooperated until a split occurred in 1845.  Southern Baptists pulled out of this organization and formed the SBC over the issue of church autonomy when Northern states opposed slave owning states being able to send out missionaries to spread the gospel.

The SBC has grown considerably since Rev. Johnson’s era becoming the second largest Christian body in the United States, second only to the Catholic Church.  However, old scars from the initial split still linger, and there has been much hope placed on Rev. Luter and his election especially in regards to diversifying the largely white convention.  As reported by The Baptist Courier in their Aug. 16, 2012, edition, Rev. Luter himself made reference to this in a speech at the Black Church Leadership and Family Conference earlier in July.  In his address he said, “They [many SBC leaders] fully expect me to nominate more African-Americans to serve on SBC boards and committees.”  While he reportedly expressed excitement at this prospect, he went on to caution those churches represented at the event by saying, “You and your churches must be involved in the Cooperative Program and your local association for me to do that.  It’s the way the SBC operates.”

Local African American minister Rev. Eddie Woods of the Trinity Community Church in Edgefield referred to this diversifying aspect in a recent conversation with the Advertiser editor.  His comments to her in essence spoke of his hope, too, that Luter’s election will help to diversify Baptist congregations.

Pastor Tommy Meador of Big Stevens Creek Baptist Church in Edgefield County, who lived in New Orleans for 8 years and attended seminary school there, had the opportunity to see the fruits of Rev. Luter’s labors firsthand.  In speaking with the Advertiser on Sunday, Aug. 19, Pastor Meador shared that Rev. Luter often spoke at the seminary and was an active part of the community.  Of Rev. Luter, Pastor Meador said, “He’s just a real good guy” and called him a “man of God.”  He went on to say that Rev. Luter was “real significant in helping rebuild the community after Katrina [the devastating hurricane that hit New Orleans in 2005].”

Edgefield County was yet again a part of the SBC’s history as Pastor Meador was in attendance at the SBC’s election of Rev. Luter.  “It was an overwhelming experience,” Pastor Meador said of being in the room as the historical election took place.  As he pointed out, Rev. Luter ran un-opposed for the position, something that is uncommon in the SBC’s presidential elections.  Pastor Meador interpreted this as a real show of solidarity of the support for Rev. Luter as the SBC’s leader.  Pastor Meador said, “Regardless of skin color, he is the right man at the right time.”  He further added that with men such as Luter leading the SBC, “We’ve got good days ahead of us.”