Europeans on Road Trip Drop by The Advertiser

By Edgefield Advertiser on September 15, 2012Comments Off on Europeans on Road Trip Drop by The Advertiser 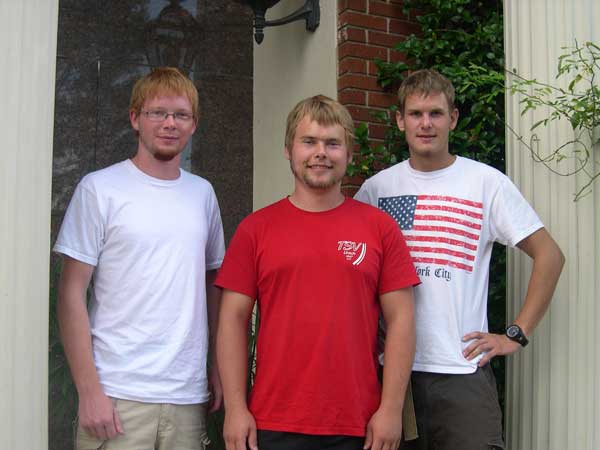 Three young men from Germany invaded The Advertiser office on Thursday afternoon, Sept. 6.  Well, all right, maybe not invaded actually, but they did hold us captive with the exciting stories of adventures they have had while here in the States.

Rob Keck, noted outdoorsman of Edgefield County, led the charge into our office bringing with him Marcel Weiss, Stefan Weiblen, and Andreas Duemmel for what was supposed to be a simple photo opt at South Carolina’s oldest newspaper.  However, the stories the three German youths told, both of their time in the US and of their lives in Germany, proved so interesting that the Who Dropped By column just could not contain it all.

It seems their adventures here in America all began when Marcel, a cousin of Keck, recently arrived in Chicago with his friends where they promptly purchased a Chevy Lumina and proceeded to traverse the North Eastern countryside of our great nation.  They made a stop in Pennsylvania to see Keck’s parents before heading south.  Alas, while their car got them safely to the South, further travel seemed beyond its capabilities as it “died” upon reaching the Edgefield city limits.  (We took this as an omen the young men should stay a while.)  A rescue call was placed to the Keck residence, and, with help, the car “limped” back to the Keck home.  However, their journey in the Lumina has ended here.  The plan is to now rent a car and continue with their travels.

And what travels they have in store!  It seems these enterprising youths met some German girls while in a hostel up North.  Those same girls just happen to work for Disney World.  So now, these three young bachelors are off to Orlando to pick up three free five day passes to the Happiest Place on Earth.  Not too shabby for three guys who could have easily ended up stranded in Edgefield County.  Now don’t get me wrong, Edgefield is a right happy place too, but when you compare it to Mickey Mouse, Donald Duck, oh – and girls who actually speak your language, Edgefield really could not compete.

By all accounts, the guys are enjoying their time here in America, and while they did seem very much like your typical young American men, the fellows did remark on some stark differences between the two countries.  For starters, each was very taken aback at the drinking age restrictions here in America.  In Germany you can legally buy alcohol at 16, so they found our age limit of 21 – well – interesting.  Only one of the three, Stephan, who is 22, can drink here in America, but they have all been doing so for quite some time in their native Germany.  It was explained to us that drinking beer in Germany is like drinking water here in the States.

Another interesting difference noted by the trio between Germany and America is the amount of homes built in the country.  Apparently homes in the countryside of Germany are not allowed; at least, not without a lot of money and good connections.  The boys explained that because Germany is so small, especially compared to America, that the countryside has to be protected or it would soon be gone.  Almost all the citizenry live in villages in Germany.

Strikingly different, too, is hunting in Germany.  According to our new friends, in Germany one must take an extensive test before being able to obtain a hunting license.  This test is assuredly nothing like the one day multiple choice test offered here in South Carolina.  To be able to purchase a fire arm with which to actually hunt, one must go to school, and again take another test.  On top of that, every hunter is given a quota on each animal eligible to be hunted that must be met that year.  While being told you must kill ‘x’ amount of deer might sound good for some hunters, it’s kind of like the old saying – “If it sounds to be good to be true, it probably is.”  You see, in Germany, if you do not meet your quota, you are fined for EVERY animal that you are short.  Marcel gave an example of one hunter who did not bag 4 deer and 6 pigs that was part of his quota in a year.  That hunter was fined nearly 100 euros for each deer and 200 euros for each pig.  That translates to roughly $80 per deer and $160 per pig.  Imagine being fined almost $1280 because, for whatever reason, you were unable to meet your quota of kills in a year!

Paying for un-bagged game is not the only money hunters can expect to fork out in Germany either.  Each hunter must pay for his part of the forest in which he is allowed to hunt; kind of like a government run hunting club.  This rental of forest space was described by Marcel as “not cheap.”  The bottom line is compared to hunters in Germany, our Southern “red-neck” country boys never had it so good; deer baiting issues and all.

While our new-found German friends are enjoying a nice break from the realities of life in Germany here in America, their adventures in the States will soon end.  After their trip to Disney, the three friends will head to Miami where they will board a plane that will take them back to their homeland.  There, the trio will be quite busy as the 20 year old Marcel, who has apprenticed to be a forester, will resume his occupation.  Stefan will soon begin studying mechanical engineering, and Andreas, 19,  will be undertaking Chemistry.  We thoroughly enjoyed our cultural exchange with these young men and got the impression that we might yet see them again in our fair town.