By Edgefield Advertiser on October 2, 2012Comments Off on Southern Studies Showcase Welcomed Many to Edgefield 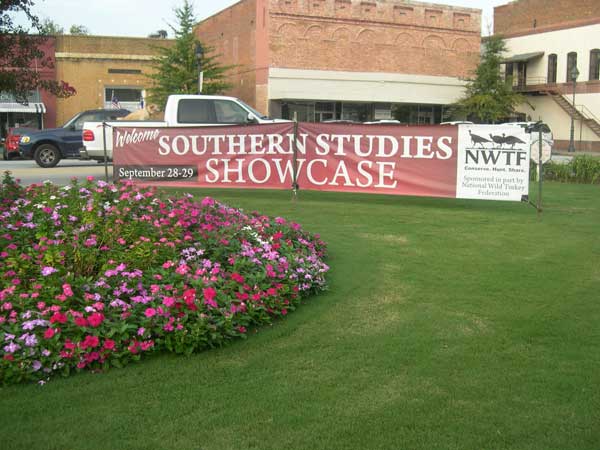 The Mayor of Edgefield, Ken Durham, has spoken, echoed by Tonya Browder, Director of Tompkins Library. He has announced the plan to continue, annually, with the Southern Studies Showcase that began last weekend and that brought many out-of-towners to Edgefield. Conferees enjoyed both “feasting” on a variety of Southern studies and feasting at local restaurants in between scheduled events. Edgefield and beyond felt the effects of the local event.

A totebag with the Edgefield County Chamber logo on it was a gift to each conferee, and it was filled with welcomes from businesses and restaurants, including Oakley Park which had a special luncheon available to the guests.

When asked of different conferees what their favorite session(s) was, the answers varied according to interests.  OEDGS veep Ralph Scurry visited a cousin’s lecture and thought it great. as well as others: “Of course Leonard Todd (on Dave the Potter) was excellent, as usual.”

Another conferee noted that “there was something for everybody; if you weren’t interested in genealogy (beginners, intermediate or advanced) there were studies on the Revolution, Civil War, and cemetery preservation, among others.” A very special study on the old Hampton Terrace Hotel, that predated the founding of North Augusta, was enticing for many. The hotel was built on the NA hill, with a golf course that “ran” to the Savannah River. “It was larger than the Bon Aire,” according to one who attended that study course. Built soon after the turn of the century, the hotel burned, January 4, 1917.

The old building on the south of Edgefield square, once Crouch Hardware and now is known as the Presley building, was alive with booths for selling books and videos. Executive Director of the Aiken County Historical Museum, Elliott Levy, was especially effective in getting folks to hear about the CD called “Horsecreek Valley.” (This writer saw it and found it superb.) People ambled in and out both days, but close to sundown on Friday evening, the amblers cleared out of the Presley building because a shoot-out was about to take place there.  It was the re-enactment of the Booth-Toney Shootout that left a number wounded.

Tonya Browder concluded the re-enactment with these words: “When the smoke cleared from the gunfight, more than 35 shots had been fired. Brooker Toney, Thomas Booth, and James Booth were dead. Eight men were wounded, including Benjamin Booth, who was considered mortally wounded, having been shot at least four times. He survived, but later lost his mind and died in the asylum in Columbia. The following year, nine men were brought to trial in Edgefield, but all were found not guilty. This proves that if you want to commit a murder and get away with it, do it in Edgefield. It also brings to mind another rule we have here in Edgefield, that it is not polite to shout across the square in order to gain someone’s attention, but it is acceptable to shoot across the square in order to assure that justice is served.”

Prior to the “shootout,” a dinner was spread and catered for 130 persons, seated, on the square.  A DJ, Pat Patterson of Greenwood, played dance music in the background.  One could hear such old favorites as “Drinking Wine Spodie-odie.” There was no dancing, but a dancing spirit pervaded.

It was noted that car tags on the Square showed evidence of many out-of-town visitors.  And there were few places to park.  Locals seemed to manage by parking a little farther away, recognizing the sign on the square – Southern Studies Showcase – as explaining the dearth of empty spaces.

For those who would like a pictorial account of this event, go to the Heritage Jubilee section for more.