By Edgefield Advertiser on November 19, 2012Comments Off on National Rural Health Day Celebrated At ECH 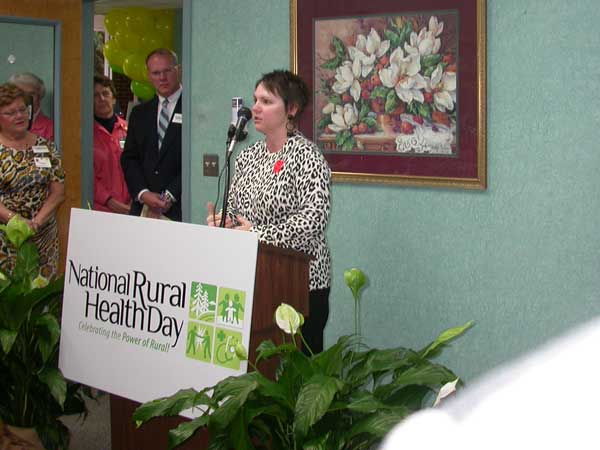 National Rural Health Day was celebrated on November 15 at the Edgefield County Hospital with a conference calling together leaders in rural health from over the state and many local members of the medical community and agencies in this county.

Mr. Tony Keck of the S.C. Department of Health and Human Services gave the address to the group gathered in the dining and board rooms of the hospital. Prior to his address there was a welcome from Hospital Board Chairman Tim Williams and Hospital CEO Pat Robinson.

The Edgefield hospital was given much praise during the remarks of others introduced during the session: Dr. Graham Adams, CEO of SC Office of Rural Health; Mr. Thornton Kirby, CEO of SC Hospital Assoc. and Dr. Amy Martin, SC Rural Research Center at UofSC.

Among the interesting facts that these leaders stated was that there are 63 million rural people in the U.S. today. One referred to the importance of rural health and its work, as like “a petri dish” for all health beyond the rural. They noted that a local hospital is important, such as the Edgefield one, because it gives good salaries and benefits which help build the community.
Mr. Keck brought greetings from Governor Haley, who when first speaking to him before his coming, asked: “Where is my Rural Health Plan?” He noted that this is a priority for the Governor.

The goal for this organization, as mentioned by one of the speakers, is to improve the quality of health care and to reduce the cost. This was a continuing theme throughout the meeting.

One noted the real importance for rural health, for this is an “opportunity to shape what healthcare will look like.”
Rural health was reduced to a very important element in the culture of this country – “being a good neighbor,” where caring begins.

As for the Edgefield County Hospital, it was praised for, early on, taking on Critical Care Access.
The hospital has been placed into a pilot program (petri dish) in South Carolina, one of two in the state, due to its excellence within the framework of Rural Health.