By admin on November 17, 2012Comments Off on Wardlaw – State Champions 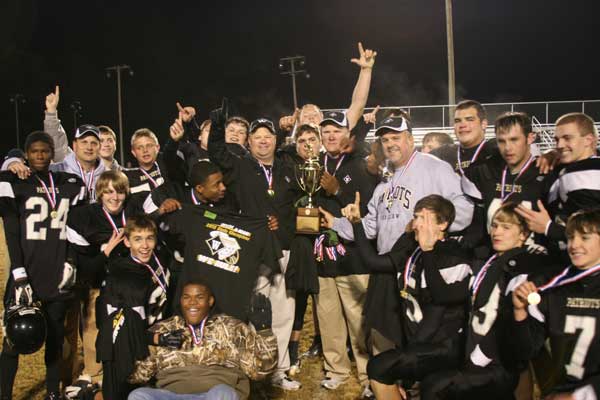 After the dust had cleared from the battle the Patriots marched home with a 58-42 victory and another championship trophy to add to the school’s mighty collection of hardware earned over the years. The victory gave Wardlaw an 11-1 record for 2012.

Holton Manly and Kerry Cockrell each had 10 carries in the game for 43 and 36 yards.   Cockrell had a 3 yard touchdown run in the fourth quarter.  Earnest Woodward and Daylen Morris each had 2 carries for 5 and 4 yards.     Woodward had a fumble return of 45 yards in the first quarter to setup a touchdown.

Rycharde Coates and Jacob Baynham recorded 8 and 7 tackles.   Others that had at least one tackle in the game were Ed Williams,  Holton Manly, Dylan Seaman, Ben Dodson,  Malik Lee, Kerry Cockrell, Zach Sherrill and Austin Rivers.

The Patriots bid farewell to  the two seniors Seaman and Cockrell and will have returning in 2013 a seasoned group of young men with the set goal of bringing home a third straight title.

Coach Mark Rodgers could be looking at a long successful run of winning seasons at Wardlaw.  He sure will not have a problem getting the boys to come out for football.   The winning tradition at the school makes the young men eager to strive for more success.

Wardlaw – State Champions added by admin on November 17, 2012
View all posts by admin →