By Edgefield Advertiser on January 12, 2013Comments Off on County Council Members Sworn Into Office 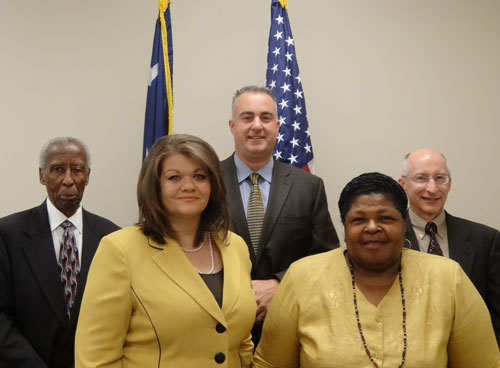 The regularly scheduled monthly meeting of the Edgefield County Council, Tuesday, Jan. 8, began a bit earlier than most of the Council’s meetings as the swearing in of members meant the meeting began at 4:00.  After their swearing in, Council re-elected Dean Campbell as Chairman and Genia Blackwell as Vice Chairman and also heard from Allen Easler and Robert Croom.  Mr. Easler, CAST Coordinator/Prevention Specialist with Cornerstone, gave Council an up-date on the agency which deals with alcohol and drug abuse.  Mr. Croom, a representative with the South Carolina Association of Counties, reviewed with Council their duties as council members as well as parliamentary procedures and the importance of functioning as a group.  Council recessed after these two guests and reconvened to conduct business at the customary 6:00 hour.

After returning from the recess, a public hearing was held on two ordinances, however, no public input was given.  One of the ordinances, authorizing the grant of easements and rights-of-way for the Hwy 25 widening project, subsequently received unanimous approval on second reading.  The other ordinance, authorizing the borrowing of money by the Edgefield County Hospital for the purchase of a Pharmaceutical Dispensing System, passed second reading with a 4-1 vote.  Mr. Dorn, the dissenting vote, stated that he could not support the measure due to concerns about default, since, as he related, the federal government seems “about to shut down.”  The dispensing system is fully reimbursable by Medicare once the system has been in operation for a given amount of time.  Also passing second reading was an ordinance to amend Chapter 24 of the County Code if Ordinances related to land development.  This ordinance, which incorporates recommended revisions by the Planning Commission as well as the removal of the Conditional Uses Section on the advice of the Upper Savannah Council of Governments, passed unanimously.

Jimmy Feagin, Supervisor of Roads and Bridges, was given authority to fill a recent vacancy in his department.  Council’s approval for this hiring was necessary due to a county-wide hiring freeze.  Council was advised that Mr. Feagin’s department was already working with one open position and a second unfilled position would greatly impede its day-to-day operations.  Additionally, it was noted that the money to fill this position was already budgeted for 2013 since the position was filled at the time of the budgeting process.  The approval for this lift in the hiring freeze was unanimous.

I&E Specialties from Lexington, S.C., was awarded the job of replacement of the roof on the Kneece Building.  Of the six bids received, I&E was the lowest at $35,717 with a $4.50/board foot cost.  (Since the amount of boards to be replaced cannot be determined before the roof is removed, Council was only given the per board charge from all companies placing bids.)  The work has a standard warranty of 2 years against leaks and 15 years on material and labor.  A longer warranty on leaks was not offered because the entire roof is not being replaced; this project is merely to stop current leaks at the building.  Council was all in favor of this measure.

The first reading of the ordinance pertaining to the Highway Overlay District passed unanimously.  This ordinance, which deals with general development areas, not residential zones, provides regulations above and beyond those established by the zoning regulations in Chapter 24 of the County Code.  This overlay will initially apply to Murrah Rd. Ext., Five Notch Rd. from the Aiken County line to Murrah Rd. Ext., and Sweetwater Rd. from the intersection of Five Notch Rd. to the Aiken County line.

Council did hear from the public in regards to the paving of Windy Ridge Rd. in their public comments section of their meeting.  Two concerned citizens from that area expressed desires to see the road completely paved.  Administrator Lynn Strom advised the citizens that preparations to begin Phase II of that paving project have begun with a portion of the residents on that road recently having been sent letters regarding interests in giving easements to the county for the project.  Phase II would continue the pavement from where it currently stops to Carolyn Way.  A final decision on this project will not be reached until responses from the letters have been received.

In her closing comments, Administrator Strom advised Council that the Emergency Management Agency is planning to move to the Agricultural Building in the near future.  The move will allow for the accommodation of equipment necessary with the recent 911 up-grades.  Half of the move will be covered by grant money, the other half by the agency’s budget.  Additionally, the EMA recently received a 100% funded grant in the amount of $4200 to go with previously awarded grant money to cover implementation of a credentialing service.

Council was apprised by Mrs. Strom of the increase in building permits for 2012.  While the actual numbers of permits showed a small increase, the value of commercial permits increased 49% from 2011 and the value of residential permits increased by 41% over the previous year.  In all, building permit values brought in over $21 million in 2012 compared to $14.6 million in 2011.

In addition to thanking Mrs. Strom and Clerk to Council, Jennifer Gilley, for helping make her transition onto the Council go so smoothly, newly elected Councilwoman Betty Butler inquired as to the status of the animal shelter project.  Mrs. Strom informed her that the project is still being reviewed but that options for Council to consider in regards to an alternate site may be available by Feb.

Before adjourning, Chairman Campbell reminded Council of the Intergovernmental  Meeting scheduled for Jan. 29 at 6:00 at the Senior Center.  He closed by welcoming Mrs. Butler to the Council and by thanking Council for his re-election as chairman.