By Edgefield Advertiser on January 29, 2013Comments Off on Douglas Elementary Montessori Program – A Unique Teaching Model 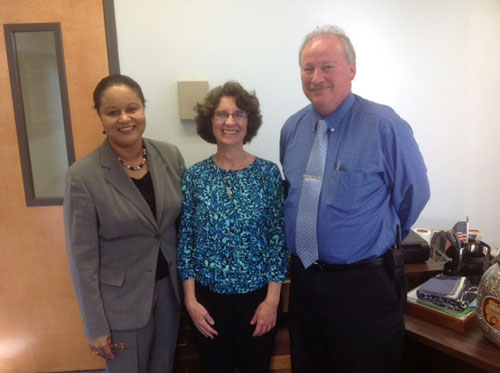 “A very good program.”  That is how Edgefield Mayor Ken Durham described the Montessori program at Douglas Elementary in a recent interview with The Advertiser.  Mr. Durham’s 4-year-old grandson is in the school’s 3-5 year old class, and Mr. Durham said he was “just amazed at the things he has picked up out there.”

Douglas Elementary Principal Bobby Turner is equally impressed with the school’s unique teaching model.  Somewhat skeptical of the program when he first came to the school, Mr. Turner said his appreciation for the teaching method grew exponentially as he was able to observe it in action.  He is now one of the program’s staunchest supporters and hopes that as the Edgefield community becomes aware of the program, it will grow and develop even further at the school.

Former Douglas Principal Cheryl Clark also highly praised the Montessori model when she spoke to The Advertiser in regards to the program’s history.  As she explained, the program was born of desire by former school superintendent Dr. Mary Crenshaw to see different classroom choices be available at each school in the district.  Together, the two decided the Montessori model was the best fit for Douglas.  Thus, three years ago the program was implemented.  Having begun with one 3-5-year-old class that had only three students representing each age, the program now boasts a 20 member 3-5-year-old class and a 1st-2nd grade class (Lower Elementary) of the same number.

While Mr. Turner hopes to see the program continue to go forward, which would include expanding to a 1st-3rd grade class next year and possibly a 4th-5th grade class in the future, he said “we have to prove ourselves.”  Two obstacles faced by the school in this regard are public awareness of the program and funding.  In addition, with the program being so new, there are no numbers to support its effectiveness.  However, Douglas is part of a 5-year study being conducted by Furman University on Montessori classes.  Mr. Turner is hopeful the data collected from this study will further bolster the program at Douglas.

In an effort to boost public awareness of their Montessori classes, Douglas is reaching out to the community and other schools within the district by providing brochures on the teaching model.  While Mr. Turner would like to see Douglas’ Montessori classes become a community Montessori program with students from across the county, he cautions parents that involvement in this type of learning model is a commitment; students will not receive its full benefits unless they continue all the way through the program.        That is because a Montessori class is not like a traditional classroom.  However, that is what Douglas’ certified Montessori teachers Christina Miller and Melissa Long, as well as Mr. Turner, feel should add to its appeal.  “It really gives students more choice … more stake in what they’re learning,” Ms. Long told The Advertiser.

Those choices can be seen in the framework of the Montessori model which uses five essential elements to define a Montessori class.  Those elements include mixed aged classrooms, students having choices in regards to activities within a defined range of options, uninterrupted blocks of work time, a “discovery” model of learning where students learn by working with materials rather than by direct instruction, and utilization of specialized educational materials developed by Montessori developer, Italian physician and educator, Maria Montessori, and her collaborators.

Mr. Turner explained, this model of learning is meant for younger students to learn from older students and for students to learn at their own pace.  They are not limited by their grade level.  If they are ready to advance, they can do so within the Montessori setting.  This program also benefits children who typically do not do well in a traditional classroom setting.  Not having to be confined to a desk and having the freedom to move around works for some students who may struggle with this traditional classroom structure.

While there are certain criteria for selection into a Montessori class, Douglas has not yet had to implement these measures.  However, if this program becomes anything like other Montessori programs across the state, which do have quite lengthy lists of students wanting to become part of the program, Mr. Turner said those criteria will have to be set in place.  The good news is that inclusion into a Montessori program is not based on tests scores, so that leaves it available to a wide range of students.

Funding for the program was initially not a concern as its start-up costs were funded by a grant from the Self Family Foundation.  However, it now relies on the school district for funding.  According to Chief Financial Officer David Fallaw, the program is now funded as any typical classroom in the district.  However, as Ms. Clark pointed out, this is no typical program and needed materials for it are expansive and require routine replacement.  In response to this, Douglas has begun hosting fundraisers to supplement the program’s costs; the next of which will be held Feb. 18 at Northside Bowling Lanes from 5-7 p.m. where $15 will cover the costs of 2 games and a shoe rental.  All proceeds from this event will go to support Douglas’ Montessori classes.

Anyone interested in learning more about this unique approach to learning is encouraged to contact Douglas Elementary.  While the Montessori model will not be right for every student, Mr. Turner wants the community to know there is another option for learning at Douglas Elementary.