By Edgefield Advertiser on February 23, 2013Comments Off on Antler Measuring Sessions Set Across South Carolina 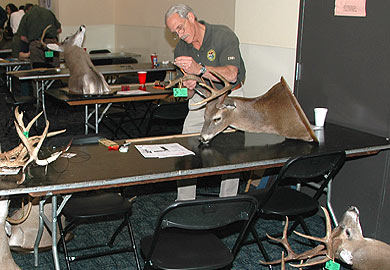 Each year during March, the S.C. Department of Natural Resources (DNR) measures deer antlers throughout the state, with a major effort during the Palmetto Sportsmen’s Classic scheduled for March 22-24 at the State Fairgrounds in Columbia. A total of 5,915 sets of white-tailed deer antlers, including 5,690 typical racks and 225 nontypical, are currently ranked on South Carolina’s all-time antler records list, according to Charles Ruth, Deer and Wild Turkey Project supervisor for DNR. Minimum scores for state record listing are 125 points for typical antlers and 145 points for nontypical antlers. Measurements are based on the Boone and Crockett system.

Although record deer have been recorded from all counties, Aiken, Anderson, and Orangeburg counties have produced the greatest numbers in the past three to four years. Generally, larger deer are more abundant in areas that have fewer deer, as compared to parts of the state with high deer numbers, according to Ruth. Last year’s measuring sessions produced 257 new entries into the South Carolina records list, the highest number of entries in the last 15 years.

For additional information on the Antler Records Program visit the DNR website.