By Edgefield Advertiser on March 13, 2013Comments Off on Purple Martin Time in Carolinas 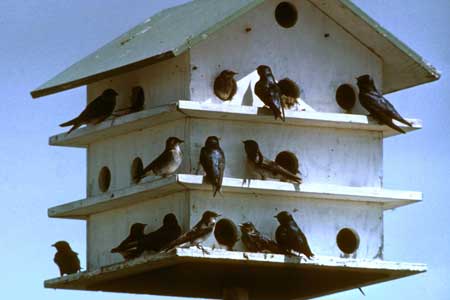 In the birding world, few species generate more excitement than does the “Purple Martin,” a swallow that is arriving now in the Carolinas, with reports  of “scouts” logged almost daily online.

Purple martins, the largest of the swallows in North America, are totally dependent on man-made housing east of the Rockies and faithfully return to the  same locations each year, so it’s understandable that human “landlords” anxiously await the return of “their” birds from wintering grounds in South America.

Purple martins begin to trickle into southern South Carolina in early February and dates/locations are watched by martin enthusiasts throughout the breeding range in the eastern United States and in Canada.

Arrivals are posted on an online database – at www.purplemartin.org — maintained by the Purple Martin Conservation Association (PMCA), a nonprofit conservation organization.

The first wave consists of  “adult” martins – those two or more years old, with adult males sporting full dark-purple color. Females are a bit drab, with a gray breast.

One-year-old martins – called “subadults” — arrive 6 to 8 weeks later than the older birds. These younger birds sometimes are more easily attracted to new housing locations. The term “scout” is a misnomer. These are simply experienced birds that are eager to reclaim their housing.

Purple martins prefer to nest in colonies in gourds hung from large racks and in multi-compartment birdhouses. A traditional way to hang gourds in the  South is from a single line between two poles, much like a clothes line.

Purple martin colonies sometimes can be found in parks and public places, including a colony on the grounds of Biltmore Estate outside of Asheville.

Purple martins feed on the wing – taking insects from the air – and early arrivals sometimes face the prospect of starvation when cold snaps clear the air of insects. Fortunately for the martins, newer techniques of supplemental feeding of insects have been developed.

Landlords can provide live mealworms, or crickets that have been frozen and then thawed, and even bits of scrambled eggs — the food placed on high platforms, in nesting compartments or flung into the air with plastic spoons or slingshots.

In late summer, purple martins gather in massive roosts in preparation for fall migration. One of the largest in North America is at Manns Harbor, North Carolina, on the outer banks, where an estimated 100,000 birds – arriving from hundreds of miles away – roost under Umstead Bridge. The Coastal Carolina Purple Martin Society seeks to protect the site and educate the public about its significance.

Another massive roost forms in Lake Murray, South Carolina, on a small island. Roost viewing tours are provided at sunset beginning in late July aboard the Spirit of Lake Murray yacht service.

Unlike many other bird species, purple martin populations overall in North America are holding steady — including North and South Carolina — based on long-term data from the North American Breeding Bird Survey (BBS). Martins can credit their good fortune to devoted men and women who erect and maintain housing.

But even in cities, martins gladly colonize housing in open parks or other public places. The species seems to prefer nesting close to human activity – perhaps because there are fewer predators.

A generation ago, many people erected purple martin houses in the belief that these birds consumed mosquitoes, but according to the PMCA martins do not specialize. A martin’s diet is diverse and includes many kinds of insects from leafhoppers, flies and beetles to dragonflies, bees, wasps and grasshoppers.

Despite relative abundance of purple martins in the Carolinas, many people try for years to attract them without success, or their colonies disappear. Hobbyists may be unaware that problems such as competition from invasive non-native birds — European starlings and house sparrows — or predation caused abandonment.

While generations of Americans have hosted purple martins – the custom adopted from Native Americans who hung out nesting gourds – specific techniques to help a colony thrive emerged in the past decade, based on research conducted by the PMCA and landlords in the field.

Among innovations are deeper compartments to protect nestlings from rain and aerial predators such as owls, specially-shaped entrance holes designed to admit martins while restricting starlings – and unique pole guards to thwart climbing predators: rat snakes and raccoons.

Because purple martins are birds of the open sky — catching insects on the fly —  the PMCA’s number one tip: place housing in the most open space available, but where the colony can be enjoyed and monitored.

More information about purple martins can be obtained from the Purple Martin Conservation Association – which is focused on aiding martins and landlords — including an information and supplies booklet, with advice on attracting and managing a colony, and data sheets to participate in a “citizen science” program called Project Martin Watch, a national effort in which participants monitor nests and mail information to the PMCA at season’s end.