Changing of the Guard for Trenton Council

By Edgefield Advertiser on April 13, 2013Comments Off on Changing of the Guard for Trenton Council 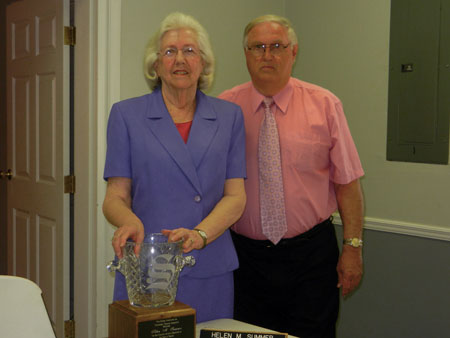 The Trenton Town Council witnessed a changing of the guard at their regularly scheduled monthly meeting, Wednesday, Apr. 10, as the mayor’s gavel was passed from retiring Mayor Helen Summer to the town’s new mayor, Billy Padgett.

The first part of the meeting was presided over by Mayor Summer as she called for the call to order, invocation, approvals of official business, and public comments.  At the conclusion of this part of the meeting, Mayor Summer made a few parting words thanking the Council for their support and expressing her confidence in the town’s welfare before gracefully taking a seat in with others convened in the audience.  Administrator Al Harvey then administered the oath of office to Mr. Padgett at which point the remainder of the meeting took place under Mayor Padgett.

Mayor Padgett’s first official act in his new capacity was to present out-going Mayor Summer with an ornately engraved crystal vase bearing the letter ‘S’ which rested on a wooden pedestal bearing a plaque marking Mayor Summer’s service to the town.  After more words of thanks and goodwill from Mrs. Summer, Administrator Harvey proceeded with the swearing in of returning Council members Shannon Philpott and Keith Sexton.

Council was asked to consider a request of sponsorship for the county’s annual Fishing Rodeo.  In the past, the town has contributed $200 to this endeavor.  However, Council was advised that for $100 more the town’s name would be listed as an official sponsor of the fishing rodeo and placed on the many free t-shirts given out at the event.  Thus, Council voted unanimously to donate $300 to this year’s Fishing Rodeo.

Before adjourning, Council members took turns expressing their thanks to Mrs. Summer for all her hard work on behalf of the town through the years.  As one Council member noted, Mrs. Summer had served beyond her position as mayor having done a lot of behind the scenes work about which many people were never even aware.  Council member Bobby Turner seemed to sum up the remarks when he told Mrs. Summer, “You’ve been a good leader.”  And with that, one of the town’s most historic and momentous meetings to date was ended.