By Edgefield Advertiser on May 31, 2013Comments Off on Bob Edmonds Releases New Book, Growing Up Southern: A Memoir 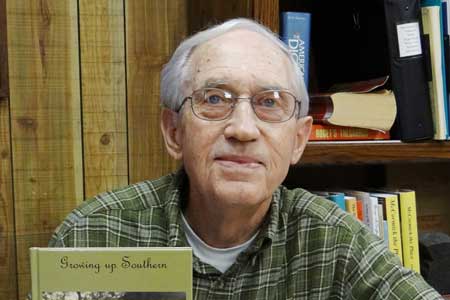 The story below ran in the May 23 edition of the McCormick Messenger.  With their permission we run it here. Find a review of book on page 2 of this edition of the Advertiser.

Local author Bob Edmonds, recipient of the Order of the Palmetto, South Carolina’s highest civilian award, for publishing local history has released his twelfth book, Growing Up Southern: A Memoir after three years in the making. His latest book is a recollection of what it was like to grow up in the grueling times during and just after The Great Depression. This Generation has been described as the era “that endured so much, won so much, preserved so much, built so much, gave so much and yet asked for so little.”

The memoir takes readers back to the era when almost all of the homes lacked both electricity and running water. Men tilled the fields with mule-drawn plows. Women cooked over wood-burning stoves, washed clothes by hand, and joined the men in the fields during the busy seasons. Families salted meat for winter storage, counted fish caught or game hunted part of their dietary staples, and often substituted a fall hog slaughter for Thanksgiving celebrations. Radio, powered by batteries, offered glimpses of the modern world outside.

The chronic distress of Southern agriculture during the Depression increasingly negated the Jeffersonian vision of the independent yeoman farmer’s pursuit of the noblest profession in the world. Many farmers simply could not pay the county taxes on their farms. As the decade wore on, foreclosures were a common occurrence over McCormick County as the sheriff and the tax collector forced sales on hundreds of entire farms, paying as low as 64¢ per acre.

The author said, “Now past four score years old, I have witnessed an era of so very many dramatic changes. To put this in perspective when I was a child there were still a few Confederate veterans alive and there were folks around who had lived during the Radical Reconstruction era.

“I originally had no intention of writing a book for public distribution. I simply wanted to leave a manuscript for my descendants so that future generations could read what it was like to grow up in the rural South during and following the Great Depression – to understand and feel what everyday life was like. Several friends encouraged me to make it available to interested readers in book form.”

In an attempt to understand American uniqueness one must consider the deep and indelible imprint of the 1930s. Without an understanding of the Great Depression, later generations will miss a key element of the American character.

Growing Up Southern: A Memoir, printed in hard laminated cover, 232 pages, 160 b&w photos, 67 color photos, is available for $20 in McCormick from Strom’s Drug Store, McCormick Messenger, Books on Main, Chamber of Commerce, Hickory Knob State Resort Park, Willington on the Way, in Greenwood from McCaslan’s or from the author.

Click for a review of Growing Up Southern: A Memoir