By Edgefield Advertiser on May 15, 2013Comments Off on DAR Awards $3,000 Historic Preservation Grant to Marsh-Johnson House 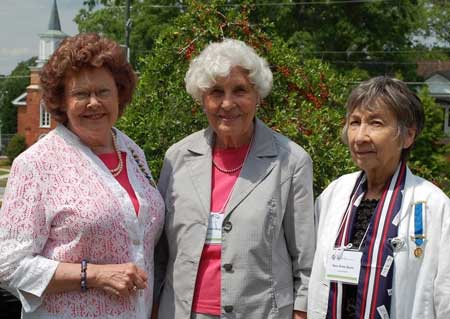 This grant from the Old 96 District Chapter, National Society Daughters of the American Revolution, will help the Saluda County Historical Society in saving one of the oldest homes in Saluda County.  During the 200 years plus, the land on which the Marsh-Johnson House sits was first the Ninety-Six District, then Edgefield District and Edgefield County and, since 1895, Saluda County. The Marsh-Johnson House is an early two-story, upcountry, plantation plain farm house built with simple lines and exceptional workmanship around the beginning of the American Revolution. The inside restoration will include  replacing flooring, replacing a sill, if necessary, installing old-growth Saluda County pine boards on the ceiling and three inside walls of the two shed rooms, restoring doors, cleaning the walls and ceilings and painting the walls in historically accurate colors. The home can then be safe for visitors and become a house museum.

Dr. Bela Herlong, chairman of the Saluda County Historical Society’s Board of Directors, said, “The members of the society and of the Saluda community are grateful that the Old 96 District Chapter, National Society Daughters of the American Revolution have given this generous grant for the restoration of the Marsh-Johnson House, an important Saluda County landmark and a part of the history of the region from the late 1700s until the present–an authentic window on the past.”

The DAR grants program was started in 2010. Funding is awarded to support projects in local communities that promote the organization’s mission areas of historic preservation, education and patriotism.

The DAR receives hundreds of grants applications each year, making competition for the funding through the non-profit organization high. Interested groups must be sponsored by a local DAR chapter, submit a copy of their 501(c)(3) IRS documentation, and include a narrative that describes the need and urgency of the project as well as planned activities and benefits to the community that will result from the grant.

The National Society Daughters of the American Revolution was founded in 1890 to promote patriotism, preserve American history, and support better education for our nation’s children. Its members are descended from the patriots who won American independence during the Revolutionary War. With nearly 170,000 members in approximately 3,000 chapters worldwide, DAR is one of the world’s largest and most active service organizations. To learn more about the work of today’s DAR, visit www.DAR.org. For more about applying for a Special Projects Grant from DAR, visit www.dar.org/grants.