By Edgefield Advertiser on May 1, 2013Comments Off on Merriwether Elementary Announces New Assistant Principal 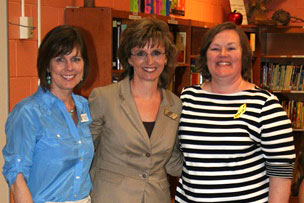 On Wednesday, April 24, 2013, Merriwether Elementary School principal, Dr. Mendi Tucker, announced to faculty and staff the open assistant principal position would be filled by Mandy Lowe beginning in the 2013-2014 school year.  Faculty and staff applauded as Mrs. Lowe acknowledged the new position and expressed excitement over the upcoming school year.

Mrs. Lowe acquired her Bachelor of Arts Degree in Elementary Education and Master’s Degree in Educational Administration and Supervision from Clemson University.  She began her teaching career at Bookman Road Elementary School in Columbia, SC.  A product of the Edgefield County School District, Mrs. Lowe wanted to come back “home” to teach.  She has a great love for the children of Edgefield County!  She is completing her fourteenth year in education, the last twelve at Merriwether Elementary School.  Mrs. Lowe is married to Heyl Lowe and they have two children, Reece and Meredith.