By Edgefield Advertiser on July 23, 2013Comments Off on Edgefield Majors Play in State Tournament [UPDATED] 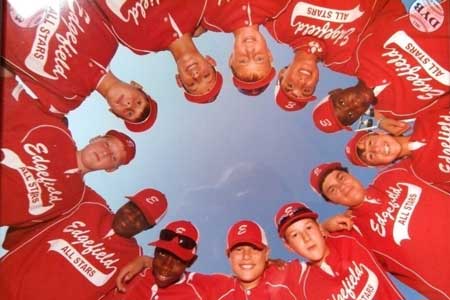 Edgefield Majors composed of 11-12 year olds from Edgefield County have represented our communities well this summer. On July 5 they began the District 3 Tournament in Iva coming home as winners. To do this they beat Johnston 6-1, then lost to home team Iva 1-4. They came back to demolish Clinton 19-0, then defeated Iva 11-3. They had to play Iva one more time for the championship and in a thrilling game they defeated Iva 1-0 in ten innings.

On to the Dixie Youth Majors State Tournament, a double elimination tourney, which is being held in Clemson and began Saturday, July 20. Edgefield defeated Edisto 13-7 on Saturday. Sunday afternoon the stands were filled with the hometown fans, but the game against Lake Marion was cancelled after the second batter came up due to lightning and rain. The game was played Monday morning and Edgefield was defeated 0-7. Monday afternoon Edgefield defeated Central/Clemson 12-8.This afternoon, July 23, the team will play Lake Marion in an elimination game. Follow the scores here on edgefieldadvertiser.com.

Tuesday afternoon the hometown heroes lost game two in the State Tournament and are headed home. It was a good run. The score was 22 -10. A Dixie Youth record was set with a total of ten home runs between the two teams. Edgefield had four by Ty Perry, Jud Childress, Jordyn Hill, and Josh Wates.