By Edgefield Advertiser on July 1, 2013Comments Off on Musical Program in Honor of Wesley Spires 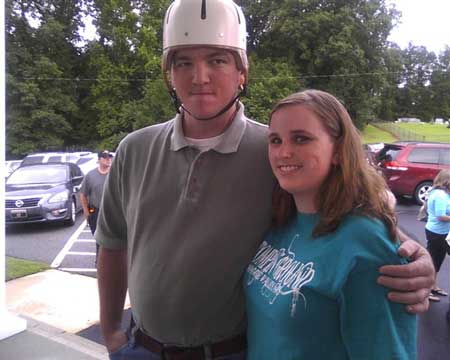 Gene and Ann Sawyer of the Merriwether section saw the announcement of the Republican Baptist Sunday evening music event to benefit Wesley and Ashley in The Advertiser. They attended and Anne wrote to the editor: “Gene and I went to Republican Baptist . . . and saw a walking miracle when Wesley Spires walked in the church door with his friend Ashley.  The church was packed and [I am] so glad a love offering was taken to help with medical expenses.”

“It was a very touching and inspirational time to say the least,” continued Ann. She and Gene snapped the photo of Wesley and his friend Ashley who were both attacked by robbers in Augusta some weeks ago. Ashley fortunately was not hurt as badly, but Wesley was seriously injured and has only recently returned to his home from the hospital.

The Sunday event was an example of the concern of the citizenry for this young man and his friend.