By Edgefield Advertiser on August 14, 2013Comments Off on Celebrates 100th Birthday With Family 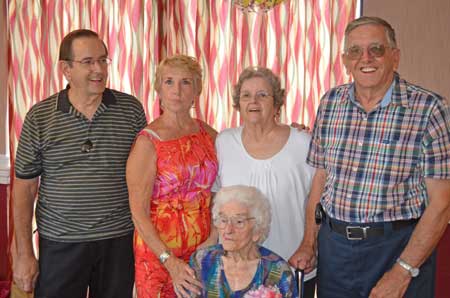 Mrs. Ruby Mae Cook Berry celebrated her 100th birthday August 10, 2013.  Pictured with Mrs. Berry are her children (left to right) Robert, Mary, Jean and Olin.  The photo was made during a party for her at her residence in the Saluda Nursing Center. She said to her son, the Weather Man for the Advertiser, “I may not make another birthday, but I made it to 100!” Mrs. Berry moved to Trenton from Prosperity in 1919. She is the mother of six children; two are deceased. She has twelve grandchildren and fifteen great grandchildren.