By Edgefield Advertiser on September 29, 2013Comments Off on DNR Honors 2013 Law Enforcement Officers of the Year 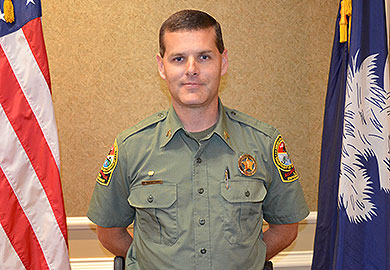 SGT Marcus R. Smith of Saluda was awarded the title of statewide S.C. Department of Natural Resources (DNR) wildlife officer of the year for 2013 during ceremonies held Sept. 26 in Columbia. Five other officers were also honored for their dedication in protecting the state’s natural resources through enforcement, education, special investigations, intelligence and records and staff operations.

Among SGT Smith’s many accomplishments over the last year included 36 hours assisting other law enforcement agencies, usually offers his assistance to others even before he is asked. SGT Smith is more than willing to perform essential, but often long and tedious surveillance duties such as sitting on baited areas, or working litter patrols to catch violators. In the past year he logged 70 hours working litter patrols and assisted on 76 cases that were written by other officers. He also had 428 hours of night patrol in the past year.

The annual officer of the year awards and banquet are dedicated to the late Chief R.M. “Bobby” Gifford, highly regarded chief of natural resources law enforcement for many years. The S.C. Wildlife Officers’ Association, the Harry Hampton Memorial Wildlife Fund, the family of Chief Gifford and DNR together honored the state’s top officers.

The following were selected as outstanding DNR officers for 2013 from each of the state’s four Natural Resources Enforcement Regions and Marine Law Enforcement Investigations and Education and Staff Operations. The statewide honor of Officer of the Year was chosen from these candidates:

DNR Officers of the Year, including the statewide title, were selected by a committee of key DNR law enforcement personnel and captains and rated in six categories: employment history; enforcement activities and specialties; awards, achievements and accomplishments; leadership, teamwork and attitude; family and community involvement; and outstanding cases.

Top men and women from across the state are chosen as DNR Officers of the Year because of their exceptional abilities in natural resources enforcement. Before assuming their duties, new officers must complete an eight-week course at the Criminal Justice Academy plus an additional five weeks of intensive DNR field training.
South Carolina’s Natural Resources Law Enforcement officers serve and protect the state’s natural resources by patrolling more than 31,000 square miles of the state’s lands and inland waters. Officers also patrol 750 miles of tidal shoreline and marine waters, to the state’s territorial boundary three miles offshore and beyond on special federal assignments.