By Edgefield Advertiser on September 1, 2013Comments Off on Friends Celebrate a WWII Veteran’s Birthday 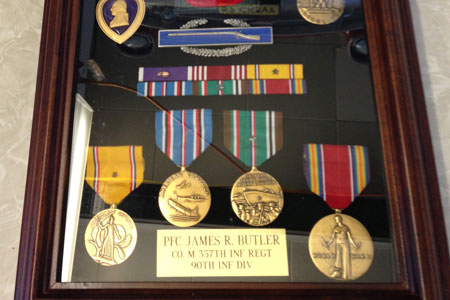 The Triangle in Johnston, a restaurant that serves Southern style food at lunch time, was the gathering place for some 20 (more or less) friends and family of James Butler who served in World War II in the Army infantry, received two Purple Hearts, and came home to spend the rest of his days where he grew up, on a family farm. He has joined a group of steady luncheon guests during the week for years now, and they saw fit to bring others in also to celebrate his contribution to our county, state and nation, as well as to celebrate his birthday, August 21, 1916.

He was enjoying the meal while being interviewed by this paper, with friends and family contributing information along the way.  He has a routine that seems to serve him well: breakfast each morning at the Amoco Station in Johnston, with friends (this is around 6:00 a.m. and he eats traditional grits, eggs, bacon); lunch at the Triangle with friends; supper he says is a light one, “sandwich,” at home on Long Cane Road.

Jim, as he is known by friends, remarked that he has lost, in the last year or so, a number of friends who were veterans and were a part of his coterie: two of those are Henry Wofford and Rufus Lybrand, of late. He had a grin on his face when he looked at the interviewer and said, “Getting pretty close.”

There were a number of former military guests at his party and two sitting at his table were: his nephew Robert Butler of Greenwood who was there with his wife Wanda; Chris Clancy who served in the Army (in Viet Nam in 1970) and has family members serving now.  They pointed out that Butler was in action during the Battle of the Bulge.

Members of Mr. Butler’s church were also there to support him, among them Julia Bledsoe of Johnston.  She said he can be found at his church. Rocky Creek Baptist, every Sunday.

Among the remembrances given him last Wednesday, August 21, were numerous cards, a package of biscuits and two jars of jam for the biscuits from Tom Quattlebaum of Monetta; and a large container of banana pudding made by Suzanne O’Neal.  The pudding served as a cake and held candles which Mr. Butler easily blew out before it was served to all who had gathered for this event.

Among those organizing this event, and were seated with Mr. Butler, were Lon and Averill Courtney.

The article below was written as a school project by Isabella Butler, great-great-niece of James Butler.  She lives in Blythewood, S.C., with her family and was about 10 years old when this was written.

My Great-great uncle James Butler was born on august 21, 1916, in Saluda, S.C. He was orphaned at a very young age and grew up with his sister and brother-in-law in Johnston, S.C.  One day he received a letter in the mail and it said he was being drafted into the U. S. Army.  He had to report on his 24th birthday to Fort Jackson, which is here in Columbia.  After he reported to Fort Jackson, he left for his training.  He traveled to Camp Croft which was in Spartanburg for a couple weeks and then he left out of Charleston harbor for Panama on December 5, 1941.  Two days after he left the Charleston harbor, war was declared because the Japanese bombed Pearl Harbor.  He spent 18 months in Panama with his guard company guarding ships at sea.  While spending time there he also had jungle duty and he contracted malaria, which is a disease caused by mosquitos.  He was then sent back to the states to Colorado where he went through another year of training to go overseas.

James left the states for England in 1944.  He arrived there a couple weeks after “D” day, which was the invasion of Normandy.  He was part of the Texas and Oklahoma 90th division which was known as the 357th infantry division, the “M company.”  His company went through France, Belgium and Germany.  They often did all of their attacking at night and on the ground.  The first time that James was wounded he was shot in the left leg, thigh and hand.  He was sent to Paris for about a month to recuperate and then was sent back to Germany.  This was the first Purple Heart that he received for being wounded in combat.  His group encountered many close calls while in Germany, had very few hot meals and never had a bed to lie down in to go to sleep.

He also was wounded a second time during a night attack.  His group captured a German and there was a struggle and he was hit in the right foot. The group lost several men in that attack. He was again sent to Paris to recover and while there the war ended and he was sent back to the states on a hospital ship.  This was the second Purple Heart that he received.  James said that he prayed a lot to God to protect him and to keep him safe and that he always thought that He would.  We still get to visit with “Uncle James” when we go to Greenwood; we just recently celebrated his 95th birthday!

Your comments are welcome below.