By Edgefield Advertiser on September 16, 2013Comments Off on Large Crowd Expected This Weekend for Southern Studies Showcase 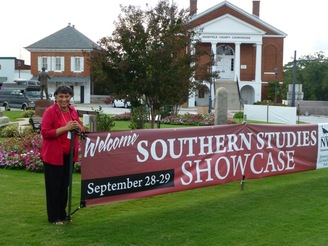 Over 100 people are registered for the Southern Studies Showcase, which will be held on September 20-21, 2013 in the Town of Edgefield and is hosted by the Old Edgefield District Genealogical Society and the Old Edgefield District African American Genealogical Society.  Local citizens are encouraged to participate in the Southern Studies Showcase by registering for the “Block Party” Friday night on the Courthouse Square.  The Old Edgefield Grill is catering the “Block Party” and there will be music and several reenactments from Edgefield’s colorful past.  One of the reenactments will be the dueling cannons of 1858.

One is a boxed lunch and tour of Historic Oakley Park, 300 Columbia Road.  This lovely home, built in 1836 by Daniel Byrd, is most famous for being the home of General Martin Witherspoon Gary, CSA.  Currently, it is operated by the United Daughters of the Confederacy (UDC) as a beautifully restored historic museum.

A delightful, homemade lunch is being offered by the UDC either in the elegant dining room or (weather permitting) on the wrap around porch.  Afterwards, the ladies will take you on a tour of this charming home for a glimpse back into the days gone by. There are many early Edgefield artifacts, period furniture, relics and stories to entice your genealogical curiosities through the many years since the beginning of Edgefield Village in 1785.

The second choice for “Lunch and a Tour” is at charming Magnolia Dale.  Built in circa 1830, Magnolia Dale was once the home of South Carolina Lt. Gov. James H. Tillman. It has been the headquarters for the Edgefield County Historical Society since 1960.

Portraits of renowned Edgefieldians adorn the walls of this grand home and many of the furnishings belonged to the Tillman family.  Also, the Strom Thurmond room contains memorabilia that traces the career of this former governor, statesman and the country’s longest serving US Senator.

The Edgefield Civic League is offering a delicious, Southern lunch in the quaint dining room or (weather permitting) on the porch or spacious grounds.  There will be a tour of the home after lunch.

The third “Lunch and a Tour” choice is at Willowbrook Cemetery, one of the most historic cemeteries in South Carolina.  Here rest men and women whose names are associated with the history of the state and nation.  The list of Edgefield’s illustrious dead includes statesmen, jurists, military leaders, preachers, doctors, and men of the every-day world.

There are four South Carolina Governors–Francis W. Pickens, John Gary Evans, John C. Sheppard, and J. Strom Thurmond–and four Confederate Brigader-Generals–John Pearson Bates, Thomas W. Carwile, Robert G. M. Dunovant, and Mathew C. Butler buried here.  They sleep beside the famous Preston Smith Brooks, who caned Senator Charles Sumner and helped bring on the War Between the States; Reverend John Lake, missionary to China and founder of a leper colony in the South China Sea; Lucy Holcombe Pickens, known as the Queen of the Confederacy; and Dr. James A. Devore, who is reputed to be buried in an underground vault, behind glass, and sitting in a chair.  These are just a few of the remarkable people who will be met on this tour.  Before the tour, a delectable, home style lunch will be provided in the fellowship hall of the Edgefield Baptist Church or (if weather permits) outside under the magnolia trees near the cemetery.

Advance tickets for the “Block Party” are $20.00 each and limited in number.  There will be no tickets sold at the “door.”  Tickets for the “Lunch and a Tour” are $10.00 each and are limited to 30 people at each location.  They may also be purchased in advance and are on sale now.  All proceeds from the “Lunch and a Tour” will go to benefit Oakley Park, the Edgefield Civic League, and the Edgefield Cemetery Association.  If interested, please stop by the Tompkins Library, 104 Courthouse Square, Edgefield, SC or call 803-637-4010.