Soldier Thanks Wardlaw Class for Their Kindness

By Edgefield Advertiser on September 21, 2013Comments Off on Soldier Thanks Wardlaw Class for Their Kindness 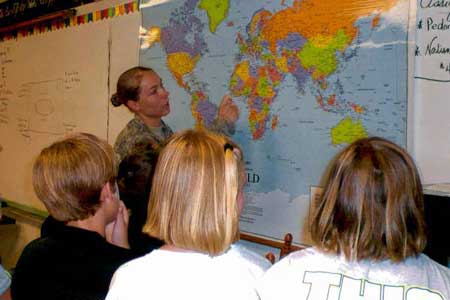 Specialist Elizabeth (“Liz”) Stone, US Army visited the 4th grade of Wardlaw Academy on Friday, August 30. Liz graduated from Wardlaw in 2008 and from Clemson in 2012. Shortly after graduation from Clemson, she was deported to bases in Kuwait, Afghanistan, Jordan on the Syrian border and Kyrgyzstan (of the former Soviet Republic). She served as a CBRN (Chemical, Biological, Radiological, Nuclear) Specialist. The class, while in 3rd grade under Mrs. Nona Kelsey had sent her several packages during her time overseas. She wanted to meet the class and to thank them for their kindness. She brought pizza for lunch, while they got to hear her story and to see pictures of the different bases. The class asked many wonderful questions. Liz is the daughter of Judy and Tommy Stone of Johnston and is now stationed in Virginia.