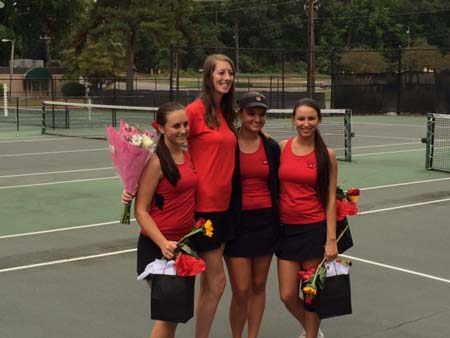 Fox Creek High School girl’s tennis team played their last home match Monday, October 7. The three senior tennis players, Kaylee Bryant, Savannah Jones, and Morgan Manly, were recognized in a short ceremony before the match against Batesburg-Leesville began. They were presented with flowers and a gift and posed for pictures with teammates, family, and friends. The match began a little after five p.m., and ended with Fox Creek winning 6 of the 7 match-ups.

All three senior girls were elated at winning their matches, as it was the last home game of their high school tennis career.

The last regular season match will be away at Saluda at 5 p.m. on Wednesday, October 16.