By Edgefield Advertiser on October 10, 2013Comments Off on J.L. Doolittle is 95 Years Young 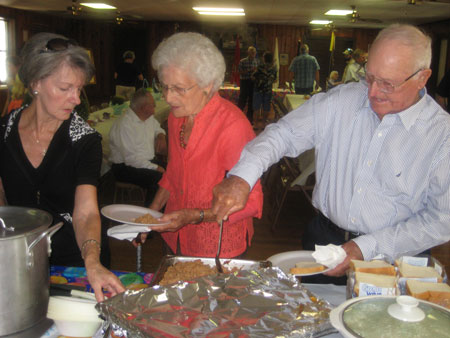 Almost 70 people gathered this past Sunday the 6th of October at the American Legion Building to sing “Happy Birthday” to J.L. Doolittle and his sister Naomi.  They were born on the same day but it is J.L. who is 95 and Naomi who is 91.  The celebrants were treated to an endless Bar-B-Que and sides buffet and a large cake with plenty of extra desserts.

On October 5th J.L. Doolitte celebrated his 95th birthday.  Born on his grandfather’s farm about a mile north of the intersection of Red Oak Grove Road and Hwy 23, he has a wonderfully sharp recollection of what life was like on the Westside of the county 95 years ago.  There were very few trees anywhere; there were cotton and corn fields as far as you could see, where he lived, water was obtained from a spring not a well.  Everyone had cattle, hogs, and chickens and a smokehouse to preserve their meat.  Potatoes were stored in hills or in corn stalk teepees.  Light was from two kerosene lamps, one in the kitchen and one in the living room.  Outhouses were as essential as the big fireplace for heat and the cook stove in the kitchen that had a tank on the side to heat water for dishes. Ice was 25¢ for a large block covered in sawdust but most everything was placed in the spring to keep cool.

J.L. walked to the school at Red Oak Grove Church joined on his mile and a quarter journey down dirt roads by neighbors Mable and Florence Thurmond, Margie and Opal Dorn as well as Alice Agner and Reginald Sharpton.  He attended the first school for a couple days before moving to the new one also on the church grounds.   “The school was always called on to attend funerals,” said J.L.

From the age of 13 he plowed the fields with mules.  At age 15 he quit farming and went to work for Wallace Quarles on his sawmill for two years.  J.L and his older brother Cleveland worked a crosscut saw by hand felling the trees. The trees were hauled by mules to a truck that carried them to the mill.  He made $1.50 a day.  At age 17 he was hired at King Mill in Augusta as a weaver.  This was the same year (1935) that Hwy 23 was paved. For 3 years he rose at 5 a.m. to plow until 11:30 when he left for the mill for 8 hours of work.

In 1939 he bought a new Ford car in the standard color of black.  It cost $200 for a used one and $400 for a new one.  He had paid half of the car off by 1941 when he told his supervisor, “Today is my last day, I joined the Army.”  He was told the job would be waiting for him when he returned but he never went back.  His father placed the car on blocks and took the tires off and there it sat until J.L. came back from the war in 1945.   When he started up the car it ran like it did before.  Many articles and books have been written to praise Mr. Doolittle’s war years.  Suffice it to say he earned three Purple Hearts, three Bronze Stars and one Silver Star.  He fought from Normandy beach and ended in Czechoslovakia.  When he arrived back in the States he wanted a Coke and some ice cream.  The Coke tasted good but the ice cream placed him in the hospital because his system was no longer used to these types of foods.

From New York, he rode a bus to Edgefield and arrived at midnight.  No one was stirring so he rode on to Augusta where a cousin living a mile away gave him a ride to his parent’s 240 acre home on Doolittle Road.  At 2 a.m. he walked into his home.  “Cleveland is that you?” called his mother Nannie.  “No ma’am it’s J.L.” came the reply.  The entire house was up in an instant and no one slept anymore that night.

With his discharge money he went to pay off his car.  The dealership said that they had marked it off but J.L. would have none of it.  He paid it off anyhow. With some more of his money he bought his own saw mill for $5,000.  That was for mules, trucks, equipment and a Texaco gas tank that once was in the front of his yard.  He would run the business for the next 5 years.   “I bought the most run down house you could buy for $1,700 cash in 1945,” said J.L.  He and Sara Gable worked on the house to make it livable and on June 28, 1946, Rev. Joseph Dukes married J.L. and Sara.  They have been married for 67 years.  Their first married evening was spent in the Edgefield Hotel.  Cotton was a staple crop in those years and J.L. figured he would plant some but Sara informed him, “I’m not choppin’ cotton,” therefore, no cotton for J.L.  Sara worked in the McCormick Mill.  From their house they could see three stores, Alvin Hamilton’s, Monroe Mathis’ and Jack Prescott’s.  Jack Prescott and his son were also barbers.

When he sold the saw mill business he went to work for Milliken Mill in Johnston until he retired.  His last 5 years he worked as a mechanic on several of their machines in various locations.

J.L. has attended church at Red Oak Grove Baptist Church his entire life where he was Sunday Superintendant for 25 years.  Daughter, Emma Jean Elwell, said, “If you wanted to go to Clarks Hill to swim after church, you had better go to church first.  No church and you didn’t get to go.”

Emma Jean is married to Rudy Elwell and have a son, Captain Troy Elwell of the Aiken Police Department and a grandson Chance Elwell.

When asked what he thinks about being 95 years old he says, “I never think anything about it.  I do what I want to do and don’t do what I don’t want to do.  When asked how old he really felt he replied, “I feel as though I was 35 or 40 years old.  I don’t grumble about anything.  I wouldn’t change anything.  I did the best I could.” When he said that, Jean and Sara agreed.  Jean added, “I do not recall him ever asking for help.”

“You are the most wonderful dad a daughter could ever have.  You have always been there for me,” said Emma Jean Elwell as she looks lovingly at her father.

Happy Birthday J.L., have all the ice cream you can hold.  You are the pride of us all, a true Christian gentleman and my friend.