By Edgefield Advertiser on October 17, 2013Comments Off on Patriot Volleyball Wins Region 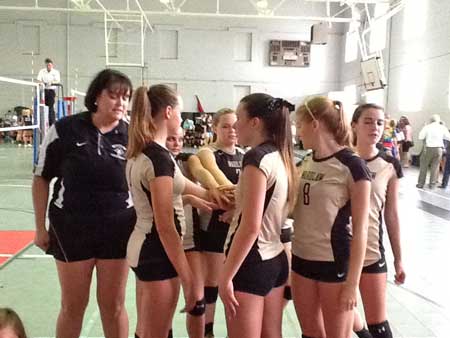 October 7 was another exciting night for volleyball at Wardlaw Academy.  First the Middle school team beat Anderson Christian (2-1) then the Varsity team won (3-1) with scores of 25-19, 25-20, 18-25, 25-22.  The win clinched the Patriots eighth consecutive Region title.  “This team has a great balance of athleticism and chemistry,” said head coach Kathy James.  “The girls look out for each other on and off the court.”

Every player contributed significantly for Wardlaw, with many playing in new positions yet again.  Junior Nicole Jackson took a break from left front and played libero, bringing 2 kills and a whopping 37 digs to the win.  Freshman Kylie Wash stepped up to cover left side hitter and chipped in 2 kills and 2 digs.  Sophomore Carly Anne Carr connected for a double-double with 11 kills, 18 digs, 1 ace and 2 blocks.  Another double-double came from freshman Beth Warnken who tallied 2 kills, 2 aces, 10 digs, and 32 assists.  Junior Katie Warnken’s vicious 17 kills combined with 5 blocks and 9 digs made for a dominant performance, while senior Lauren Williams claimed 5 kills, 8 digs and 3 aces.  Mara Brumbaugh (junior) added 7 digs and Lauren Hammett (sophomore) had 13 service points,100% serving, and 1 ace.

“We are playing our best volleyball right now, and the girls are improving every time we step on the court,” noted Assistant Coach Christie Warnken.  “It’s a great way to head towards the post season.”

Head Coach Kathy James agreed, “We have been preparing for the playoffs since summer workouts, and we look forward to playing teams from all over the state.  It’s a great tournament and a terrific opportunity to see how we match up against other programs.”