By Edgefield Advertiser on October 30, 2013Comments Off on Strom Thurmond High Duo Selected for North-South 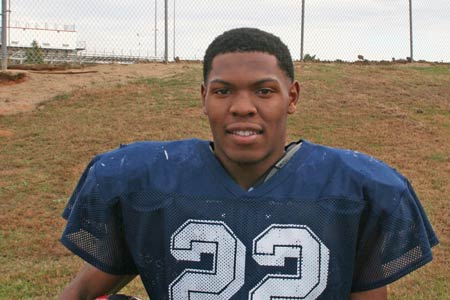 Senior quarterback Jauveer Hammond lives in Johnston and has played all four of his high school years for Strom Thurmond.  Hammond has not committed to a college as of this announcement but does have plans to become a math teacher upon completion of school.  Jauveer reacted to his selection stating, “It is a great honor and hopefully the exposure will help with scholarship offers.  As we approach the end of the 2013 regular season #10 is sporting 1,141 yards passing for 10 touchdowns and 935 yards rushing for 8 touchdowns

Kenyatta Dunbar, a senior linebacker, is from the Merriwether section of Edgefield County.  #22 has committed to play college level for Gardner-Webb with plans to become a physical therapist.  Kenyatta leads the Rebels with 65 tackles in 2013. When asked how he felt about his selection to the All Star Game he responded, “It is a big achievement, I never thought it would go this far.”

The North South All Star Game will be played December 14th at Doug Shaw Memorial Stadium in Myrtle Beach.  Kickoff is scheduled for noon.