By Edgefield Advertiser on October 1, 2013Comments Off on Trenton Fire Department Assists with Eureka Fire – UPDATED 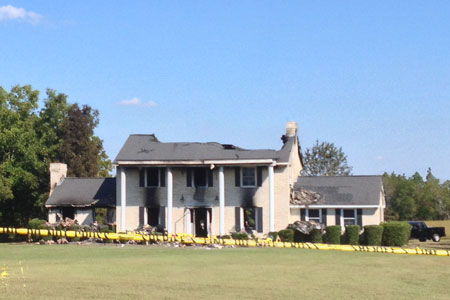 An early morning fire at a home on Edgefield Rd./Hwy 19 in Eureka, SC, claimed the lives of three people Tuesday, Oct. 1.

According to Aiken County Coroner Tim Carlton, the cause of the fire is considered suspicious and the fire is under investigation.  Mr. Carlton said the three bodies, which have not yet been recovered or identified, will be sent for autopsies in Newberry.  Those autopsies are scheduled for tomorrow.

Fire fighters from 6 different departments, including Trenton Fire Dept. which sent two trucks with a total of four firefighters, assisted with the blaze.

Aiken County Coroner Tim Carlton announced Wednesday, Oct. 2, that the victims of a fire on Hwy 19/ Edgefield Rd. that occurred Tuesday, Oct. 1 have been identified.  Diane Warren, 65, Calvin Warren, 62, and Helen Williams, 89 (mother of Diane Warren) perished in the early morning fire to which 6 neighboring fire departments, including Trenton Fire Dept., responded.  The causes of death were carbon monoxide poisoning and thermal injury.  While the initial circumstances of the fire were deemed suspicious, Coroner Carlton said after autopsy evidence and further investigation the fire has been ruled accidental.