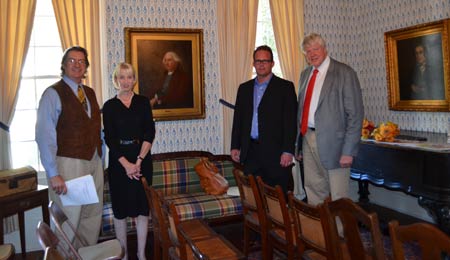 The Edgefield County Historical Society held its Fall Meeting on Sunday afternoon, November 10, 2013 at Magnolia Dale.  The subject of the meeting was Edgefield County’s Blocker Family and was occasioned by the acquisition by the Society of three wonderful portraits of early Blocker Family members.  The portraits were of John Blocker, Sr. (1749-1814), the first of the family to come to Edgefield County, of his son, John Blocker, Jr. (1778-1836) and of his daughter-in-law, the wife of John Blocker, Jr., Mary Talbot Blocker (1792-1832).  The portraits were acquired by the Society at an auction in North Carolina in September.

The meeting was called to order in what will henceforth be called “The Blocker Room” by Society President William Morgan Benton who welcomed the standing-room-only crowd.  Members of the Old Edgefield District Genealogical Society were also present for their bi-monthly meeting.  Mr. Benton opened with an invocation and then led in the Pledge of Allegiance to the flag of the United States and in singing “The Spirit of Edgefield.”  He then addressed the State of the Society, noting that the Discovery Center continues to be an important part of our mission with its museum and theatre.  He announced that the Edgefield County Theatre Company had renewed its space agreement for the William Miller Bouknight Theatre.  He addressed the need for the Society to move forward with securing and restoring Horn’s Creek Church.

He also noted that the Society’s Annual Tour of Churches will be held on Sunday, December 1, 2013, beginning at St. Mary’s Catholic Church at 3:00.  Society Archivist Tricia Price Glenn, who is in charge of the Tour, described the event and urged everyone to come and participate in the Christmas tradition.

Mr. Benton then called on two descendants of the Blocker Family, Ms. Amy Geer of Fairfield, Florida and her cousin, Will Geer of Atlanta, Georgia, to join him in making the presentation of the Blocker portraits.  Ms. Geer was instrumental in helping the Society to acquire the portraits.  Both Ms. Geer and Mr. Geer addressed the group with comments about their branch of the Blocker family.

Bettis C. Rainsford, the Society’s Historian, then spoke about the Blocker family.  He noted that the family moved to Edgefield County during the American Revolution, probably during the winter of 1778-1779.  Although no records of land acquisition were not found until 1790, it is likely that Blocker had acquired property after he got here but was unable to record the deeds because of the turmoil during the Revolution.  John Blocker, Sr. built the Blocker House sometime around 1790, or perhaps earlier.  He was involved in supporting the patriot cause during the Revolution and was active in the affairs of the county during the 1780’s.  His son, John Blocker, Jr., built Cedar Grove, the magnificent house some five miles north of Edgefield.  The date of construction of Cedar Grove is believed to have been sometimes between 1806 and 1825, probably in the period before 1819.  John Blocker, Sr. died in 1814 and is buried in the Blocker Cemetery behind the Blocker house, together with his mother and his wife.  John Blocker, Jr. moved to Florida in the late 1820’s.  John Blocker, Sr.’s son, Barkley Blocker (1790-1849) who was married to Nancy Brooks (1798-1871), inherited the Blocker House.  The house remained in the Blocker family until 1871 when it was sold to Samuel B. Hughes.

Major John Rufus Blocker (1838-1864), son of Barkley Blocker and Nancy Brooks, and husband of Emma Nicholson Blocker (1838-1921) was killed in the Civil War in fighting near Richmond.  His son, who was born after the death of his father, was Captain John Blocker (1864-1942).  He and his wife, Jackie Stevens Blocker (1872-1960) were the parents of Dr. John R. Blocker (1904-1985), the longtime pharmacist in Edgefield (Timmerman and Blocker Drug Store), Josie Blocker Herlong (1912-2007), wife of Henry M. Herlong and longtime and much-beloved teacher in Edgefield, Addie Blocker Smith, wife of Jake Smith, Emma Blocker Salley, Margaret Blocker Kinard and Elizabeth Blocker Carter.

The meeting then adjourned for a wonderful reception hosted by Jane Gunnell, Clarice Wise, Helen Feltham and other lovely ladies of the Society.  After the Reception, members went out to the Blocker Cemetery for a tour.