By Edgefield Advertiser on December 5, 2013Comments Off on Christmas Tree Lightings 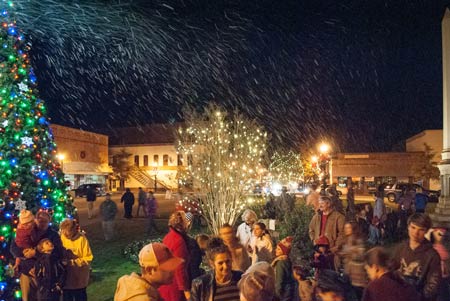 The Edgefield square was filled with anticipation as children and adults settled in on Friday evening for a short program of carols, emceed by Caroline Bland, Clio Lampkin led in prayer, and Gina Lester Sheely led the singing.

The climax was the turning on of the Christmas tree lights by the Mayor along with the first burst of snow into the air.  Festive and exciting it was.

The square now awaits the parade on Sunday and other advertised events of this weekend. Santa Claus handed out coloring books to children who stood in line.