By Edgefield Advertiser on January 11, 2014Comments Off on Judge Joe Anderson Recognized With Professionalism Award 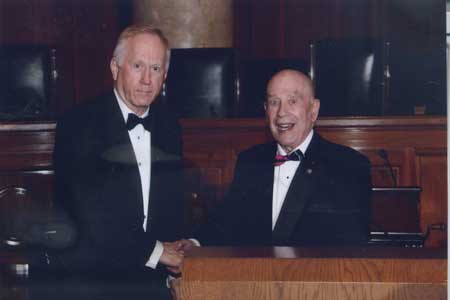 U. S. District Judge Joe Anderson was recently recognized in ceremonies at the Supreme Court in Washington as the 2013 recipient of the American Inns of Court Professionalism Award. The award is given every other year on a federal circuit basis to a lawyer or judge whose life and practice display a sterling character and unquestioned integrity coupled with ongoing dedication to the highest standards of the legal profession and legal skills. Judge Anderson received the award for the Fourth Judicial Circuit, consisting of Maryland, Virginia, West Virginia and North and South Carolina.

In accepting the award, Judge Anderson paid tribute to those who had mentored him throughout his career and mentioned his upbringing in Edgefield, South Carolina. He said the values imparted in small town life served him well as a lawyer, legislator and judge.