By Edgefield Advertiser on January 9, 2014Comments Off on Mt. of Olives Cemetery Sees Great Improvement 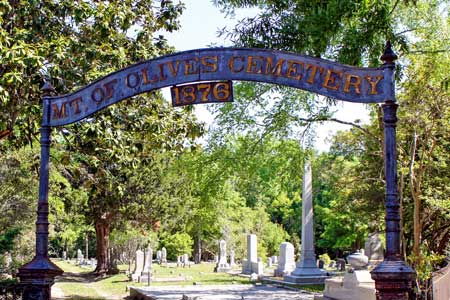 The Mount of Olives Cemetery in Johnston was in the news in 2013; the gateway arch fell and was in need of repair.  There was a call for donations from families associated with the cemetery – a group that reaches far beyond the boundaries of Johnston.

Recently the archway was put back, in good repair, and as the present head of the committee for this project, Marguerite Cassels, has said: “The response has been heartwarming and wonderful and I am so grateful.” And she adds: “It should be good for another 200 years.”

Not only has the archway over the entrance been repaired and placed back where it serves to welcome the visitor, much work has been done in removing unwanted growth that has covered some of the older gravesites.

Mrs. Cassels, in a recent interview, told of some “new” regulations about entering the cemetery, and what to expect in the next year or so from work that will continue. She warns that the gateway marked by the newly repaired arch is not to be used by cars. “Present day vehicles are too wide,” she says. However, there is a walk through gateway that is just to the right of the archway which they discovered “swings both ways” and will welcome visitors to enter there.  Cars can park outside of the gate; there is room.

For those who prefer to enter by car, they need to travel to the next entrance road, just down from the gateway arch, and there cars may enter without fear of causing harm.  She says at this second entrance is where much work has taken place to open up the cemetery.

Marguerite sends out a word of thanks and especially to Owen Clark who, together with Mrs. Cassels, started the drive over a year ago for funds to repair the cemetery. She thanks the gracious contributors to this project and the following people for their invaluable help and advice: Mayor Andy Livingston, Roy Kirkland, Bob Newman, and Eric Shuler (owner of Arbor Tech Tree and Landscape) “whom we owe so much because of his pro bono work on the cememtery.”

In 1970, when Johnston celebrated its centennial, Mrs. A. J. Lewis wrote an article about Mount of Olives Cemetery which we reprint below from the centennial publication.

A small olive tree, brought from the Holy Land by a Johnston minister many years ago, still stands sentinel here at the entrance of old Mount of Olives Cemetery.

Few are left in the town who remember when the tree was planted by the late Rev. W. T. Hundley during his pastorate at the local Baptist Church, 1880-1882.  It has stood through the years, a small, scrubby little bush which gave the cemetery its name.

Grounds for the old cemetery in the heart of the town were given in 1876 by the late Edward J. Mims who lies buried near the entrance.  Many of his family rest there also, beneath marble headstones weathered by the years.

A steel arch over the main gateway with the inscription, “Mt. of Olives, 1876” with wide wrought iron gates beneath, stands as a living memorial to many of the women of the town of another era.  They raised funds to erect the arch.  They lived in a generation when ice cream festivals, chicken dinners and oyster suppers were fund raisers for civic improvements – scheduled at churches and town halls – and families gathered at them for fellowship and to buy saucers of homemade ice cream at five cents and oyster stew at 25 cents a bowl.

Many of the beautiful old monuments were carved and erected by a local firm, “Langston Marble Works,” and many were brought from other countries.  Among them is a person-size angel shipped from Italy.  It marks the grave of the late Mrs. Annie E. Dasher. Every detail of this work remains today in perfect condition.

One section in the old cemetery is owned by the local Methodist church.  The first one to be buried there was a pastor, Rev. John Owen, killed in a hunting accident in 1900.  He was born in England in 1854 and came to America in 1869.  Nearby is the grave of his wife, Annie Warren Owen.  Several infant graves are also in the square.

Some of the monuments are carved with unique inscriptions.  “A Stern Man – A true Friend Who Serves His Neighbor.” “God Took Him Home to Heaven Suddenly at 5 P.M.” “Weep Not For Me.”

One monument has a granite football marking the grave of a high school youth who met an accidental death. . . There is only one memorial in the cemetery.  It is erected to the memory of the late 1st Lt. Pope Lott Browne, “Our Knight in Shining Armor.”

Lt. Browne, son of Mrs. Hunter Lott Browne of Johnston, was captured on Bataan and lost in the South China Sea.  His brother, Jacob Francis Browne, who also served in World War II, died later and is buried in the same plot.

Strolling casually through the cemetery one would hardly notice a large plot belonging to a band of gypsies.  The story is told that the nomadic gypsies were encamped in a wooded area near Johnston when a child became ill and died.  People in the town were so sympathetic and generous that the group decided to bury the child here.  During the following years when a member of the clan died, even far away, the body was brought back to Johnston.

No “famous” people lie buried in old Mt. of Olives.  “Each in his narrow cell forever laid, the forefathers of the hamlet sleep” under the magnolias and cedars – people who lived simple and God-fearing lives, leaving a legacy of truth and honor to their children and children’s children who have forged the Johnston of today.