By Edgefield Advertiser on January 23, 2014Comments Off on Republicans Present their Political Agendas in Edgefield 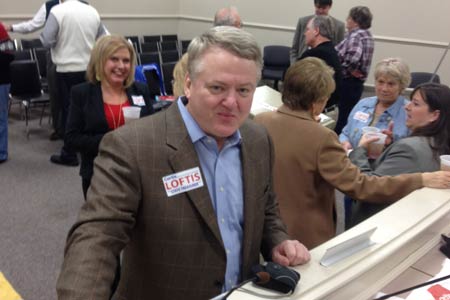 The Edgefield County Republican Party met this past Tuesday, January 14, at the Edgefield County Council Chambers with Chairman Rodney Ashcraft presiding over the session. An informative meeting was had, with two speakers, SC State Treasurer Curtis Loftis and Claude O’Donovan, a citizen from Aiken.

Curtis Loftis addressed the crowd first, and gave a thorough talk on South Carolina’s finances. Treasurer Loftis, a native of Lexington County, was first elected State Treasurer in 2010. He has pushed hard to make the finances of South Carolina more open, transparent and accountable. The Treasurer’s asking of questions and requesting financial information has made some powerful incumbent politicians in Columbia uncomfortable.

Treasurer Loftis has focused much attention on the operations and effectiveness of the South Carolina Retirement System (SCRS) Investment Commission. This appointed body invests the money which backs all of State, County and Local officials’ and workers’ current and future retirement checks. To sum up Treasurer Loftis’ findings:

We pay too much; we earn too little; our financial portfolio is overly expensive and complex – all of which puts our retirees and taxpayers in a bind at a future date.

A few charts of statistics were shown in the meeting:

4)    If SC paid fees at the national average, last year fees would have been $154 million rather than $427 million – keeping an additional $273 million in retirees’ hands

Donovan Rallies Support for The Conventions of States

The second speaker of the evening was, who explained to the attendees that a bill has recently been filed in the SC Legislature, which would call for a convention of states. This is a legal way for citizens to propose amendments to the US Constitution. The Convention of States was put into the main body of the Constitution, under Article V, as a method for the states to assert their position when Congress fails to act.

According to O’Donovan, matters such as term limits and a balanced budget amendment could be addressed by the convention. Two-thirds of the states would have to call for a convention of states and then any proposed constitutional changes would have to be approved by three-fourths of the states. Those in attendance were urged to support the nonpartisan effort and to get their legislators to support the convention of states.

Locally, the House District 83 captain for the convention of states is Tracy Lancaster Walsh. Tracy can be reached at: 803-341-2713; or randtwalsh85@gmail.com.