By Edgefield Advertiser on February 19, 2014Comments Off on China Grove Baptist Church Damaged by Earthquake 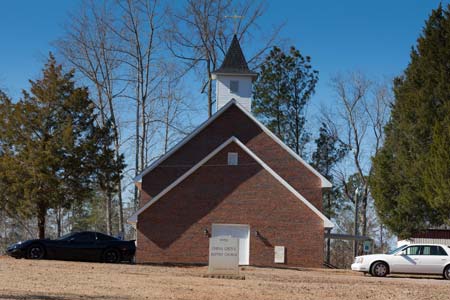 China Grove Baptist Church, located on North Martintown Road, sustained damage from the 4.1 earthquake that shook Edgefield County and beyond, Friday, February 16.  The earthquake’s epicenter was actually about a quarter of a mile behind the church in a wooded area, but, as China Grove is the nearest structure to the site, it is being used as the quake’s reference point.  Because of this distinction, the church has garnered a lot of attention from many media outlets who came to the county to cover the seismic event.

According to China Grove’s minister, Pastor Luther Garrett, who spoke with The Advertiser on Monday following the earthquake, the tremor caused the brick and mortar to separate in some places on the outside of the church.  Pastor Garrett said there was also some “minor interior” damage attributed to the quake.  The church does have insurance, though, and Pastor Garrett said the church plans to have the damage repaired.  The damage was not sufficient enough, however, to disrupt the church from meeting as services were held there Sunday as scheduled.