By Edgefield Advertiser on February 1, 2014Comments Off on Lithuanian Born; Longtime South Carolinian 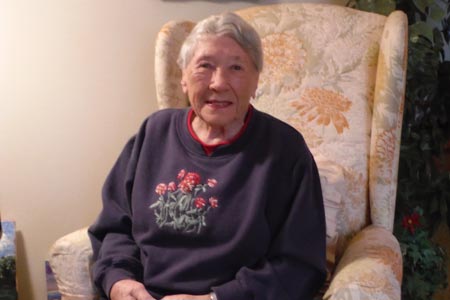 “Everything I need is here.”

She has a flag on her car; she says it is to help her find it when she is in town.  This may be because she is short, but her height is no measure of a vigorous spirit found in her energies and enjoyment of life. And she takes care of that car herself, by taking it for all the steps necessary, at the shop, to keep it running smoothly.  It is an old car, by many a person’s standards, but she says: “ I don’t want a new car (one has been offered by her family in the past).  There are too many buttons and devices for driving a new car that I don’t want to have to learn.”  This small dynamo is a smart lady who knows her mind and handles such practical issues with determination,

Nancy Guobaitis knows who she is, what she likes and she lives by strong values, many having served her well since her early life in Lithuania.  A widow, she will be 94 this spring (April 13), and here is her story, in salute to all those who as nonagenarians are teaching us how to be when we arrive, hopefully, at that age.

This newspaper met her in the 60s, soon after her and her husband Vince’s arrival in town.  She was picking wild mushrooms out on a friend’s place, “out in the country.”  Wild mushrooms, mind you, the opportunity to make a mistake for most of us, which could mean poison.  However, Nancy gained the knowledge of “good” wild mushrooms from her father in Lithuania. She said as a child she walked with him in the woods to gather these mushrooms.  Then they would take them home and wash them, cut them up (all with the help of her mother, no doubt), cook bacon and onion and then fry the mushrooms in the bacon and onion mix.  Does this sound good?

Nancy still cooks with aplomb.  If invited to someone’s house, more often than not, she brings some baked cookies or a bottle of her wine that she has made right there in her home.

Yes, everyone knows that Nancy Guobaitis makes wine and she does so from any grapes given to her, because she says her own grape arbor, that which one can easily see behind her house, does not produce grapes.  She is grateful to Clyde Jackson who says to her each summer: “This row of grapes is yours, Nancy.  Pick all you want.”  And she does all the harvesting herself, from wherever she can find grapes.  That includes the elderberries on the side of the road.

Nancy’s story has been told many times in the local newspapers, starting with the story in the Advertiser in the 60s. There is a photo of her in that story, sitting on the ground with her basket of wild mushrooms.  A scarf is tied on her head, in Heidi fashion, reminding the reader that this lady is not just American, which she claims now with ardor, but she brings with her a background story of Eastern Europe at a time when there was great unrest – in fact, war.

She and Vince Guobaitis knew each other from young years, and according to her story, he was insistent and finally they became engaged and married.  This was in the early 40s. They left Lithuania to escape the coming forces and they ended in Germany, and in Bavaria, for some years in a refugee camp. Their first child, Helen (whose death came early, a few years ago) was born there, in the camp.  As the war ended they worked to leave Europe and come to America.  They heard that there were farmers in the U.S. who needed help, and so first they came to Minnesota, and eventually to New Jersey.  Vince worked in textile manufacturing and was sent south to help develop Star Fibers in Edgefield.

There is a stirring story about Mr. Guobaitis, that when he came to America he carried a dictionary with him at all times, to learn the language.  Eventually he spoke it without accent.  Nancy has kept her accent, possibly because she was at home in the traditional sense as the homemaker.

The newspaper, in this story, was most interested in how she manages her life, to have such energy and drive.  She says she does a great deal of her own gardening, cutting back on plants outside herself, though she has a gardener to help with some of the heavier work.  She said she raked leaves this fall, but it got too rainy and cold to finish. She admits to having a lawn mower that she uses also.

“I have a glass of wine, every day, “ she says in answer to what she takes in to keep her going.  “I don’t like sweets.”  So, what does she like? Her answer, with a big laugh, is “bread and meat!”

She loves to cook. She notes that she went to agriculture school in her native country and there they had many cooking classes. And on her parents’ land were many apple and cherry trees from which she cooked and enjoyed their fruits. “I like to bake,” she says.

She has had numerous surgeries, a pace maker in 2012 (and that year she did not make wine); She has had both hips replaced and both knees. (One would never know from seeing her walk.)  She says she is moving all day long, working in her house, doing all the cleaning, and caring for the grounds.

As for her day, it ends just before midnight, after the 11:30 news on TV. She says she is in bed before midnight, but sleep may not come immediately.  And something awakens her at 7:00 a.m. every morning, “But I don’t get up then.  I like to stay in bed and watch the morning news.” And then she iterates: “I don’t HAVE to get up!”

And speaking of the television, she says she may watch a movie on TV in the evening, but during the day she is too busy with her duties in the house and in the community (She is faithful to her church, St. Mary’s Catholic).  She remembers her first viewing of the TV, in 1950, when the farmer in Minnesota for whom her husband worked bought a small black and white TV and invited neighbors and workers in to watch. Movies had been out of the question in her home country, though they had movie houses, because of the war.  Now she says she does not go to the movies because that means going to Augusta.  This brings up the fact that she has told her family she will not drive to Augusta, at this time in her life. “But I drive to Johnston, Trenton, and all around here; everything I need is here.”

And she speaks of “here” as where she loves to be. “The beauty of Edgefield is there are people here who are willing to help me, if I ask. No one has said ‘No.’”

A widow since the 70s, a mother of three (two are deceased as of the last few years), and a grandmother of four, Nancy Guobaitis still expends great creative energy which she shares with her community. She is in touch with some of her family daily, through phone calls, and hardly a week goes by that she is not seen about, active and responsive in the community she loves.