By Edgefield Advertiser on February 20, 2014Comments Off on Philippi Baptist Church to Celebrate 200 Years 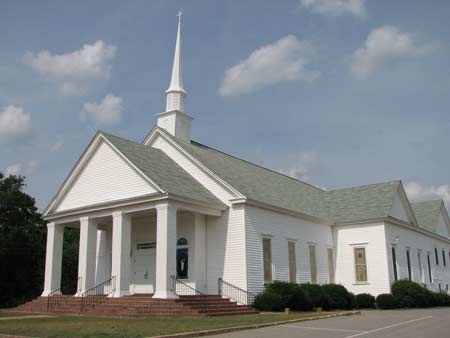 On February 23, 2014, Philippi Baptist Church of Johnston will celebrate 200 years since the church was organized to serve a rural area of the Johnston community. The church began on February 26, 1814, as the “Baptist Church of Christ at Bull Branch”, which was founded by 25 charter members. On that inaugural date in 1814, three ministers of the gospel comprised the presbytery of the church, consisting of Rev. Thomas Deloach, Rev. Francis Walker, and Rev. John Landrum. Over the past 200 years, it is believed that four church buildings have served as the Philippi Baptist Church Sanctuary. The present, and fourth, church sanctuary was completed in July of 1897, during the pastorate of Rev. Dr. J. C. Browne of Aiken. Several additions and upgrades that have taken place to the church over the years, which has over time been developed into the beautiful church that we see today. The first sanctuary was a log structure that was located on Bull Branch, which was located near Snake Branch Road, Johnston. Prior to 1886, Philippi Baptist Church maintained membership primarily in the Edgefield Baptist Association. Philippi Baptist Church has been a member of the Ridge Baptist Association since the establishment of the association in 1886.

Church services on February 23, 2014, will begin at 11:00 AM with the regular Sunday Morning Worship Services by Rev. Josh McClendon. The special Bicentennial Services will begin at 2:00 PM, with guest speaker Rev. Dr. Frank S. Page. Rev. Dr. Page is President and CEO of the Southern Baptist Convention Executive Committee and is a former President of the Southern Baptist Convention. In addition, members of the Philippi Baptist Church Bicentennial Committee are collecting items of historical significance, to include as old photographs associated with Philippi Baptist Church. These photographs might include old Sunday School Class Photos, photos that include former Pastors who have served the Church, or any other photos that are relevant to our goal of historical preservation and documentation of past activities associated with Philippi Baptist Church. We would be glad to electronically copy any photo that you would like to share with us of historical interest, while on site. We hope that the community will join us in the 200th Anniversary of Philippi Baptist Church on February 23, 2014, as we remember the past service that the church has provided for the community and as we look forward to the next 100 years of obedience to the great commission of sharing the Gospel.