By Edgefield Advertiser on March 21, 2014Comments Off on OEDGS Hears Cantey Haile of Columbia 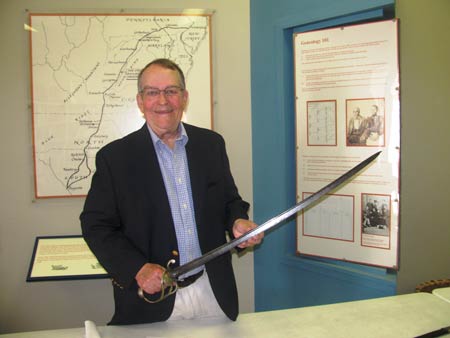 The Advertiser was given Cantey Haile’s, M.D., notes from his speech to the OEDGS on Sunday, March 9, and in this report some of his anecdotes have been lifted for the pleasure of the reader.  Ed. Note

Dr. Haile, who spoke to the Old Edgefield District Genealogical Society ten days ago, offered this opening story about his “Grandfather Hambden Brooks (brother of Preston Brooks),” before telling of the family family sword he brought with him and about its identifications.

“At this point, he was offered a Lieut. Colonelcy rank if he would agree to command a group of Union prisoners in an attempt to turn them into Confederate soldiers.  Two of his officers were Wardlaw and Simkins, prominent names in this area.  Unfortunately, in choosing the Union prisoners to be galvanized, some hard-core Union troops who lied about their origins and were chosen with the idea that they were either Irish or English.  They began immediately to cause problems.  This unit of galvanized Yankees was then sent to South Carolina.  They just missed the battle of Honey Hill in Hovemer of 1864, but were outside of Savannah at a dangerous time, as Gen. Sherman was approaching the city.  The galvanized Yankees sent a messenger to Sherman who promised them relief and promotion if they would mutiny and capture the Confederate officers of the unit.  Fortunately, one of the sergeants of the galvanized troops betrayed the mutiny to the Confederate officers.  By this time Grandfather Ham was a Lieut. Col. He led the disarming of the mutineers and subsequent execution of some of their members.  A full write up of this episode can be found in “Stories of the Confederacy” by grandfather’s nephew Ulysses Brooks, who wrote several books on the Civil War.  At the end of this interesting occurrence, one of the writers describing the mutiny had this to say about Col. Brooks. ‘He was cool and collected, spoke in a gentle well modulated voice with perfect self-control and it was only in his eye that the spirit and temper of the man could be seen.’”

Of special interest to his audience at the Sunday gathering was the sword that Dr. Haile (he is a retired ENT, having practiced in Columbia) brought with him, which has the name of Hampden Brooks on it, but more than likely was first used by Preston Brooks.  He gave many of the reasons why it was likely to have been used by Preston. Dr. Haile believes that the sword was attained by Preston in Mexico (he was Mexican made and Hambden never went there): “Clearly, this obviously Mexican staff officer sword was brought home by Preston and presented to an even younger brother (brother Whitfield had been killed by now at Cherubusco), Grandfather Ham.”

Other factors about the sword were noted by Dr. Haile. After a discussion with Dr. Jack Meyer, the conclusion was made that the sword was made in England. Since it came from Mexico, the fact that the Mexican Army was using mostly British and Spanish weapons at this time is importatnt.

Another notation by Dr. Haile was about the “indentation which is a perfect fit of a boot heel.”  In his presentation, Dr. Haile stated that the indentation was an example of what was done often to prevent the sword from rattling if absolute quiet was requited (it caused the sword to be held more tightly in the scabbard).”

That indentation gives a palpable feel to the words of Dr. Haile: “At this point, the sword clearly was in Grandfather Brooks’s possession for the entire Civil War.”