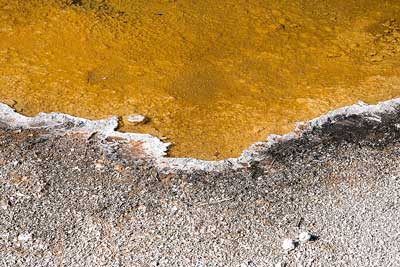 CLEMSON, S.C. – Road-salt runoff has got to go somewhere. Clemson University environmental researchers raise concerns that the record amounts of salt crystals and brine used on icy roads this winter will wash into the freshwater and affect the food chain. Too much salt becomes an environmental stress and can be deadly to aquatic animals.

Professor Steve Klaine, director of the Clemson University Institute of Environmental Toxicology, and graduate student Katherine Johnson have been studying the impact of salts on the reproduction of a tiny freshwater insect: a Daphnia known as a water flea. While the work has focused on the long-term impact of salts that are residues from fossil-fuel fired power generation, there is similarity to the environmental stress caused by the salt compounds used on roads to lower the freezing point of water.

“Salt is salt. It’s all created equal,” Klaine said. “What we have learned about salts — sodium chloride, sodium sulfate and sodium bicarbonate — that are scrubbed out of the smokestacks at coal-fired power plants and carried away in the waste stream can offer insights into what may happen from higher than normal salt loads washing into streams. There’s reason for concern.”

After a recent snowstorm, Klaine and Johnson discussed what happened to salt applied to roads. “Since the salt has nowhere else to go, we theorized it must runoff into nearby water bodies,” Johnson said.  “And sure enough, other researchers have found that runoff does occur and may have negative effects for aquatic organisms. We realized just how broad the applications for my research were.”

The S.C. Department of Transportation reported using nearly 34,000 tons of salt and 2.3-mllion gallons of a brine solution since January 2014. Although this is more than usual for South Carolina, it’s not much more than a pinch compared to Ohio, where average use tallies about 650,000 tons of salt per year.

Klaine’s and Johnson’s concerns are supported by other researchers. In 2010 Wisconsin state and U.S. Geological Survey scientists reported in the journal Environmental Science and Technology that bioassays of sampled Milwaukee-area streams showed high concentrations of salt, failing water-quality standards and causing toxicity to aquatic insects.

The situation represents an enduring conflict of competing needs.

“We have to make a choice between road safety and a significant environmental problem, which in this case may be short term,” Klaine said, whose fossil-fuel residues research arises from society’s need for electricity.

The research funded by the Washington, D.C.-based Electric Power Research Institute was to study the effluent toxic wastes, such as heavy metals arsenic and selenium, and other chemicals.

“We found that the heavy metals were a small component of the toxicity of the effluent and that salts were a much larger component,” said Klaine,  who has been involved in environmental toxicology for more than 30 years.

Johnson’s master’s degree research has shown that the impact of one salt compound plus another is greater than expected.

It’s bad news for the Daphnia, which are food for small fish. Klaine has not studied the effect further up the food chain.

“In the long run, we’ll have to wait and see what other research shows,” said Klaine.