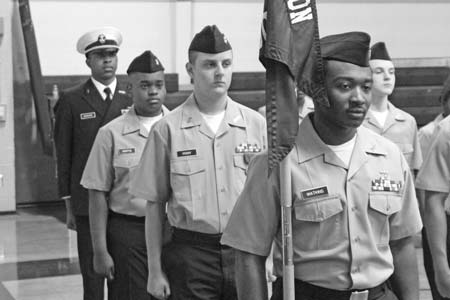 Historically the boatswain’s call was used to pass commands to the crew when the voice could not be heard over the sounds of the sea. Because of its high pitch, it could be heard over the activities of the crew and bad weather. Pipe aboard: Flag-rank officers or an important guest is boarding a Navy ship. This is part of a ceremony called “tending the side” which includes a party of sailors known as “side boys”. It has its origins in the need to hoist visiting senior officers aboard using a bosun’s chair when the weather was too rough for the use of ladders. The bosun would use his call to direct the side boys in the hoisting of the chair.

The Strom Thurmond High NJROTC Pass-in-Review concluded with the singing of God Bless America by the STHS Concert Choir and the Pass-in-Review.