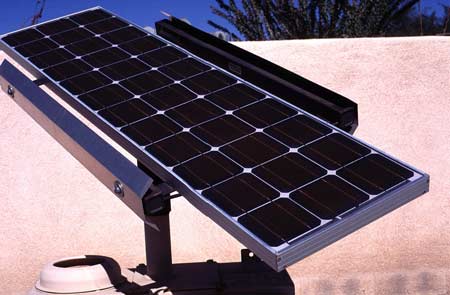 Aiken Electric Cooperative, Santee Cooper and the Edgefield County School District dedicated today a Green Power Solar School at Merriwether Middle School. The school has been equipped with a solar cell array which is already producing electricity from the sun’s rays, providing students with a firsthand look at the opportunities and challenges of solar power. Students, educators and utility representatives gathered around the pole-mounted solar array to officially commemorate it and observed a demonstration of the solar cars.

“This is an exciting day for our children and their future because this solar project provides them a real world tool right here on campus that will spark imaginations that will lead toward innovation. We are pleased to be a part of teaching valuable lessons to them, the leaders of tomorrow,” said Bill Inman, Vice President, Strategic Services of Aiken Electric Cooperative.

“The investment made in Merriwether Middle School is an investment in the future of energy for our state,” said Steve Spivey, renewable energy manager at Santee Cooper. “Programs like Green Power Solar Schools challenge tomorrow’s leaders to think critically about renewable energy sources and how they might benefit future generations.”

Santee Cooper and the state’s electric cooperatives have partnered to install Green Power Solar Schools in electric cooperative territories across South Carolina. The initiative is designed to encourage interest in the environment and demonstrate the feasibility and limitations of renewable power generation. Each Green Power Solar School receives a 2-kilowatt solar power system, which will provide a teaching and research opportunity for students. The project uses a new renewable energy curriculum designed especially for the program that meets state science standards. Each school program is supplemented by an Internet-based monitoring system that provides real-time access to information on the system’s performance as well as other solar schools in South Carolina.

“We are excited about this important project, and we thank Aiken Electric Cooperative and Santee Cooper for the new learning opportunity they have presented to our students and staff,” said Greg Anderson, Edgefield County School District superintendent. “The Green Power Solar School at Merriwether Middle School will allow students to get a firsthand look at how electricity can be produced through solar technology, hands-on activities outside the doors of the classroom. The Edgefield County School District is honored to have been selected to participate in this program.”