Continuous Laughter in this Play

By Edgefield Advertiser on May 23, 2014Comments Off on Continuous Laughter in this Play 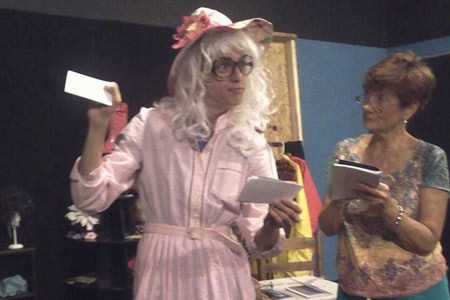 Jonathan Thomas has shaved his beard and head, evidently to make way for several wigs, caps, glasses and hats that he wears with the various characters portrayed (but none hide his harry chest).  He has a rather cherubic visage with no hair and even features, and that image, juxtaposed with the character (Pearl Burris) of a dog-killing woman (addictive behavior as presented), creates a dichotomy of the sweet/evil woman. The scene of Burris with Henry’s birddog is one of the greatest slap stick creations ever, according to this writer.

And then you have Carson Faulkner who is the opposite, physically, to Thomas – long and lean with a body that can almost fold over, and does at times, when he goes to sleep listening to a preacher’s eulogy.  When he plays the disturbed, overweight sister of the Bumiller family, he is almost his best.  The depiction of Charlotte Bumiller runs a close race with the depiction of Dee Dee Snavely, whose teeth and hair amount to an electric witch tightly wound to cause trouble – and she sells used arms (the killing kind).

In Tuna, Texas, all the found-funnies of the South come to life, and if an attendee can laugh at himself as a Southerner, then he is in for a fun-filled evening. Authors Jaston Williams, Joe Sears and Ed Howard, leave little uncovered for the audience to experience, and Texas style.

The test of getting changed into costumes in time is there for both the stage managers and the players. (The back-stage hands are to be applauded!) Behind the scenes were Linda Clancy dressing Carson and Caroline Bland dressing Jonathan.  Linda Clancy and Jonathan did most of the costuming.

The music in between scenes, some tunes straight out of the Baptist Hymnal and sung in Western style, carries the lilt of humor and spirit that persists in this play to the last minute.