By Edgefield Advertiser on May 13, 2014Comments Off on Greater Tuna of Texas Invades Edgefield 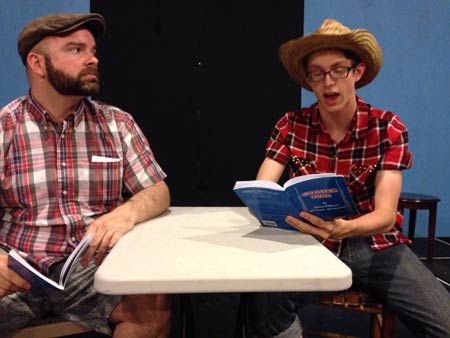 For those who have not seen Greater Tuna, it is one of the funniest shows ever.  This writer saw it several times at least 20 years ago, and it holds such fun.  It takes two remarkable actors to play the role of numerous characters in a small town in Texas. (Remember, Edgefield helped settle Texas!) And the audience never gets tired of these two actors. The play opens May 23 at the Discovery Center and is to run for two weekends.

Jonathan Thomas, who has been seen on stage at the William Bouknight Theatre for many seasons now, and has directed as he is also doing in this play, is making a grand stretch by playing many characters, male and female. Carson Faulkner, who played Charlie the mailman in On Golden Pond, has to change costumes and gender a number of times also. Linda Clancy is the assistant director and stage manager. See the ad on page 6 for more information.