By Edgefield Advertiser on May 21, 2014Comments Off on SC Law Enforcement Officers Hall of Fame Inducts Nine 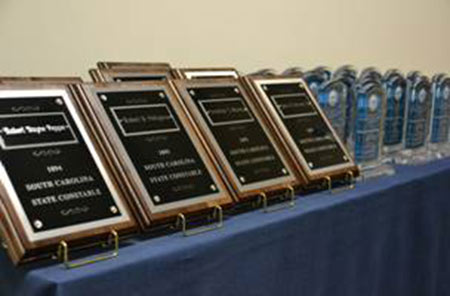 The South Carolina Law Enforcement Division, or SLED, is essentially the modern-day evolution of the old State Constabulary.

The SC Law Enforcement Officers Hall of Fame is part of the SC Department of Public Safety. It was established by legislative act in 1974. By that act, its purpose was defined “as a memorial to law enforcement officers killed in the line of duty and in recognition of the selfless dedication of all law enforcement officers in the day-to-day performance of their duties.” With the current inductions, 350 officers who have given their lives in service to the people of South Carolina are honored in the Hall of Fame Memorial Room.

This year, the following officers were inducted: