Sheriff Dobey Invited to White House to Meet with President

By Edgefield Advertiser on May 20, 2014Comments Off on Sheriff Dobey Invited to White House to Meet with President 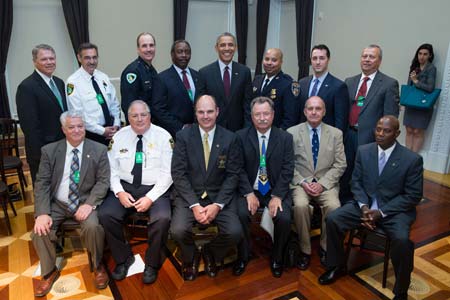 Forty (40) law enforcement officials from across the country (only two from South Carolina) met with President Obama, Department of Homeland Security (DHS) Secretary Jeh Johnson, and other senior officials for a briefing and discussion on how Commonsense Immigration Reform will help law enforcement better serve and protect their communities, and the critical role of law enforcement in the current national dialogue.

Sheriff Dobey stated that it was an honor to meet the President and Senior Staff, and be able to voice his concerns on the issues at-hand in Edgefield County and the State of South Carolina.

Illegal immigration brings the threat of crimes with it. Crimes that are important to law enforcement and citizens alike include: Drug Trafficking, Organized Crime, Counterfeit Documents, Numerous Traffic Offenses, Human Trafficking for Sexual Exploitation, Violent Gangs, and other crimes.

Edgefield County Sheriff Adell Dobey also said he is proud of the relationship the sheriff’s office has with Immigration and Customs Enforcement (ICE). ICE agents are responsible for monitoring crimes, and the deportation of illegal immigrants that have violated our laws.